< Time Wasters: Lollygag and Dillydally
Update Required To play the media you will need to either update your browser to a recent version or update your Flash plugin.
By Anna Matteo
18 September 2021

On this program we explore words and expressions in the English language.

Today, we begin with a story about two good friends: Caleb and Corrine. They have a lot in common. They like the same books, enjoy the same movies and play the same sports. 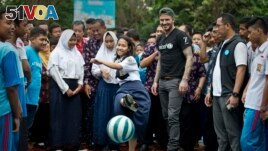 But, the friends are also quite different in the way they live their lives.

Corrine is a planner. She always has a schedule. And she likes to makes lists. She is always on time and knows exactly where she is going.

Caleb is a free spirit. He likes things unplanned and likes to see where the road takes him. In fact, sometimes he does not know exactly where he is going.

One day, these two friends decided to go shopping together. You might find it surprising that something like shopping would test their friendship. But it did.

To Corrine shopping is an unpleasant task. So, she does it as quickly as possible. She goes to stores as soon as they open. And she buys only what she needs.

To Caleb shopping is an adventure! He likes to linger in front of store windows. He looks at the objects for sale for a long time without even stepping inside the store. This activity, that is popular with some, is called window shopping.

Caleb does not pay much attention to his shopping list. In fact, he usually doesn't have one. He likes to browse. And he says that browsing has resulted in some of his best purchases.

Well, he calls it browsing. Corrine calls is dawdling, or wasting time. And that is where their problems started.

The two had decided they would have a party. They had to shop to buy party equipment, like pretty dishes and tablecloths. They also needed to buy flowers, balloons and other decorations.

This meant going to several different stores. Caleb wanted to browse to help him get ideas for the party. Corrine just wanted to buy what they needed and leave. It was not going well.

Finally, when Caleb lingered too long again at a window display, Corrine said, "Can you please stop dillydallying. You've been lollygagging this whole time and I just want to go home!"

Caleb turned to her and said, "I am not dillydallying. Nor am I lollygagging. This is how I shop. If you feel like this is wasting time, then you can go home."

Corrine thought about it and said, "That is the best idea I have heard all day!" While Caleb shopped, Corrine could start making food for the party.

It was a good idea to separate and do different tasks. The party was a success, and their friendship survived.

Now, back to our words: Lollygag and dillydally. They are funny sounding words.

People who fool around during tasks can be said to "lollygag." People who "dillydally" move or act slowly.

And as we said earlier, these words also mean "dawdle."

Lollygaggers, dillydalliers, and dawdlers all waste time. We usually use these words to describe people who move or act slowly to avoid doing something unpleasant.

Here's another example. A parent might accuse their child of lollygagging on their way to school. Or a teacher might accuse a student of dillydallying before starting a test or homework. Sometimes we just say dally. So, a parent could warn a child, "Don't dally at the playground after school. Come straight home!" Although, that usage is a little less common.

And please note when you say someone is dillydallying or lollygagging, as Corrine did with Caleb, they might take offense.

schedule – n. a plan of things that need to be done and the times they will be done

free spirit – adj. a person who thinks and acts in an uninhibited way without worrying about normal social rules

browse – v. to look at many things in a store, in a newspaper, etc., to see if there is something interesting or worth buying

dawdle – v. to spend time wastefully : DALLY : to move slowly and without purpose

decoration – n. something that is added to something else to make it more attractive