< Three-Wheeled Classroom Comes to Philippine Tribe
Update Required To play the media you will need to either update your browser to a recent version or update your Flash plugin.
By Jill Robbins
18 October 2020


The Aeta people live in distant mountainous parts of the island of Luzon in the Philippines. The coronavirus pandemic forced their schools to close earlier this year. A group of teachers living nearby worried about the effect on children. So, they started to deliver school materials in a new way.

No internet or television

Other students in the Philippines have been able to take online classes. But Aeta people living in the mountains north of Manila have no internet connection - or even television – for distance learning.

Christopher Semsem is one of the teachers behind the project from the Villa Maria Integrated School. He and the other teachers thought of a different way to bring learning to the villages in the rural area of Pampanga.

They used old bookshelves and wooden boards to make a moving learning center. It has a large computer screen and rests on top of a motorcycle rickshaw. 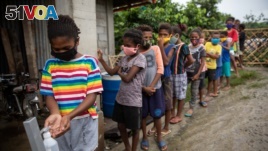 Aeta students queue to sanitize their hands before a session at the makeshift rickshaw learning center for Aeta community distance learning amid the COVID-19 pandemic, in Porac, Pampanga, Philippines, October 12, 2020.

Teachers first record videos on their mobile phones. Then they play the videos on the screen to help the children with lessons. This helps both teachers and students avoid the need for face-to-face contact.

So far, Aeta students have reacted well to the classes. Their parents were happy that classes had begun again, the teachers say.

History of the Aeta

There is debate among scientists about the history of the Aeta. Their traditional way of life is to move from place to place. But deforestation – or the cutting down of trees -- has led many of them to settle in one place.

School Principal Marizen Tolentino said the rickshaw project was important to help the children understand their lessons. Many of them cannot read, so they need help with learning materials on paper.

Since the project first started in early October, the rickshaw has visited five villages. The moving classroom reaches around 500 students two to three times a week.

Teachers volunteer their time for the project. But the local government provided the rickshaw and driver.

Adrian Portugual and Eloisa Lopez reported on this story for Reuters. Jill Robbins adapted it for Learning English. Ashley Thompson was the editor.

screen - n. the usually flat part of a television or computer monitor that shows the images or text

motorcycle - n. a vehicle with two wheels that is powered by a motor and that can carry one or two people

rickshaw – n. a small, light vehicle with two wheels that is pulled by one person on foot or on a bicycle and that is used in some Asian countries

How do people in distant areas of your country learn? We want to hear from you. Write to us in the Comments Section