< Three Men Found Guilty in Death of Ahmaud Arbery
Update Required To play the media you will need to either update your browser to a recent version or update your Flash plugin.
By Mario Ritter Jr.
24 November 2021


A jury in the American state of Georgia has found three men guilty of murder and other charges in the 2020 killing of Armaud Arbery.

The men chased the unarmed 25-year-old as he was jogging through a neighborhood next to his own in southern Georgia. One of the men, Travis McMichael, then shot and killed Arbery.

All three attackers are white. Arbery was Black. One of the attackers videotaped the killing. 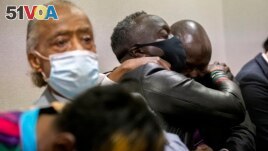 The jury found 35-year-old Travis McMichael guilty of the most serious murder charge. His father, 65-year-old Greg McMichael, and their friend, 52-year-old William Bryan were found guilty of lesser charges of murder.

The case fueled national anger about race and justice after the video was published online, two months after the murder.

State government lawyers did not argue that race was a reason for the killing. But state prosecutor Linda Dunikoski said Arbery presented no danger to the men.

"They killed him not because he's a threat to them. No weapon, no threats, no way to call for help. He (Arbery) ran away for five minutes," she said.

Federal officials have charged the three with hate crimes. They accuse the men of killing Arbery because he was Black. The federal trial is expected to take place in February.

The mostly white Georgia jury took about 10 hours to reach its decision.

The defendants had argued that they suspected Arbery of stealing. Defense lawyers said the two were attempting to carry out a legal citizen's arrest when they chased Arbery. Travis McMichael said that he shot Arbery in self-defense. Defense lawyer Jason Sheffield showed jurors video which appeared to show Arbery reaching for Travis McMichael's gun before the shooting.

The prosecution answered the claim of self-defense by arguing that the defendants had started the incident by seeking to stop and question Arbery.

Before the incident, Arbery was seen leaving an unoccupied, partly built house in the neighborhood.

The state prosecutors said there was no evidence that Arbery had done anything illegal at the house or in the neighborhood.

The victim was registered for classes at a local college before he was killed. Reports say he was studying to be an electrician.

Arbery's death started nationwide protests last year after video of the incident leaked out two months afterwards. Police had not charged the defendants with murder before that time.

Russ Bynum reported this story for the Associated Press. Mario Ritter Jr. adapted it for VOA Learning English with additional material from VOANEWS.com. Caty Weaver was the editor.

prosecutor –n. a lawyer who represents the side in a court case that accuses a person of a crime and who tries to prove that the person is guilty

assault –n. the crime of trying or threatening to hurt someone physically

construction –n. the act or process of building something (such as a house or road)