< Three Awarded Nobel for Medicine for Identifying Hepatitis C Virus
Update Required To play the media you will need to either update your browser to a recent version or update your Flash plugin.
By Bryan Lynn
05 October 2020


Three scientists won the 2020 Nobel Prize for Medicine on Monday for identifying the virus responsible for Hepatitis C.

The Hepatitis C virus is a major cause of liver disease, a condition that affects millions of people worldwide.

The committee noted that the three had identified a major source of blood-borne hepatitis. It said the source could not be explained by the Hepatitis A and B viruses, which were discovered earlier.

Their work – dating back to the 1970s and 1980s – made possible blood tests and new medicines that saved millions of lives, the committee said. 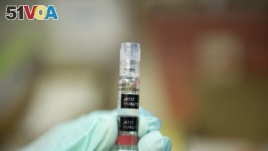 FILE - A nurse loads a syringe with a vaccine against hepatitis at a free immunization clinic for students before the start of the school year, in Lynwood, California, Aug. 27, 2013.

The World Health Organization (WHO) estimates there are over 70 million cases of Hepatitis C worldwide and 400,000 deaths from it each year.

Hepatitis is a term for inflammation, or an infection, of the liver. There are five main Hepatitis viruses, known as types A, B, C, D and E.

The Hepatitis A virus is usually spread through human waste in water or food. But the virus is deadly in less than one percent of cases. Many people infected with Hepatitis A never get sick. And those who do usually recover within two months.

Hepatitis B and C are spread when blood from an infected person enters the body of another person. People also can get infected with Hepatitis B if they share personal-care products that might have blood on them.

Hepatitis C is a major cause of liver cancer and cirrhosis of the liver, a condition that causes scar tissue to slowly replace healthy cells. In time, the patient may require a liver transplant operation.

The Nobel prize for medicine has special importance this year because of the coronavirus pandemic. The health crisis has shown how important medical research is for societies and economies around the world. It has also demonstrated the serious effects a single virus can have on the whole planet.

"Thanks to their discovery, highly sensitive blood tests for the virus are now available and these have essentially eliminated post-transfusion hepatitis in many parts of the world," the committee said.

The discovery also led to the speedy development of antiviral drugs directed at Hepatitis C, it added. "For the first time in history, the disease can now be cured, raising hopes of eradicating the Hepatitis C virus from the world population."

Harvey Alter carried out his prize-winning studies at the U.S. National Institutes of Health, where he remains active today. Rice worked on hepatitis at Washington University in Saint Louis, Missouri. He now works at Rockefeller University in New York. Houghton, born in Britain, studied at the Chiron Corporation in California before moving to the University of Alberta in Canada.

Alter spoke about the early morning telephone call he got from the Nobel committee in Stockholm. The American said he ignored the first two times the phone rang before "angrily" answering it the third time. He added that his anger went away "in about a second."

"In this crazy COVID year where everything is turned upside down, this is another nice upside down for me," Alter added.

John McLauchlan is a professor of viral hepatitis at the University of Glasgow in Scotland. He called the prize winners "pioneers," saying their discovery had made it possible to fight the disease worldwide. In 2016, the WHO approved a plan of action to beat hepatitis by 2030.

"That would mark the first time we might possibly control a viral infection using only drugs," McLauchlan said.

Nobel Committee member Patrik Ernfors noted similarities between the medicine prize and efforts by scientists around the world to find a vaccine to fight COVID-19.

"The first thing you need to do is to identify the causing virus," he told reporters. "And once that has been done, that is, in itself, the starting point for development of drugs to treat the disease and also develop vaccines," Ernfors said.

The 2020 Nobel Prize in Medicine is the 111th to be awarded for medicine since 1901. The winners will each receive an equal share of the $1.1 million in prize money.

The Associated Press, Reuters and VOA News reported on this story. Bryan Lynn adapted the reports for Learning English. George Grow was the editor.

source – n. where something comes from

borne – v. carried or transported by the thing specified

cirrhosis – n. a serious disease of the liver

scar – n. a mark left on the part of the body after an injury

eradicate – v. get rid of something completely

deserve – v. to have earned or been given something because of the way you behaved or the qualities you have

pioneer – n. a person who is one of the first people to do something