< 'This Ain't It' and Other Short Forms
Update Required To play the media you will need to either update your browser to a recent version or update your Flash plugin.
By Dr. Jill Robbins
15 April 2021


If you often use online social media, you will see many examples of informal English. One expression that you may wonder about is: "This ain't it, chief." It is used to tell someone they are wrong about something they posted on social media. For example, a drink company posted a question asking if people would enjoy pumpkin spice flavored juice. Many people answered the question with the same four words: "This ain't it chief," meaning "no." 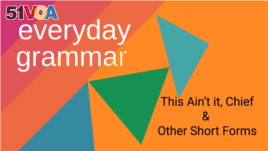 This Ain't it Chief and Other Short Forms

Many respected grammar books will tell you that "ain't" is "nonstandard English," meaning not usual. Popular dictionaries have warned against using the word for years. So, its recent rise in use might make you think it is a new slang word. However, "aint" has a long, rich history in British and American literature.

The contraction "ain't" is usually a short form of "am not," but it can also mean "is not" or "are not" as well as "have not" or "has not." Before changes in pronunciation in English, the short form of "are not" was written "an't." We would pronounce it /ant/. It appears in a 1695 comedy, Love for Love:

You need not sit so near one, if you have anything to say, I an't deaf.

The spelling changed to "ain't" - and that first appeared in print in 1778, in a novel called Evilina. Later, you can find it in Charles Dicken's novels as he tried to show readers the Cockney dialect, a speaking style common among working-class Londoners.

Like most informal contractions, we must tell you it is best to avoid "ain't" in writing for school or work. But it is something you are likely to hear from English-speaking friends. Now you will understand what it means.

Another informal contraction you will read in social media is "tryna." On the surface, you might guess that this is a short form of "trying to." It means "attempt" in these Twitter comments:

Everybody tryna out do everybody...

But another meaning seems to be at work in sentences like this:

The meaning in this sentence is "wants to." It is also clear in this question:

Who tryna draw me in this shirt.

In other words, Who wants to draw me?

In this sentence, the word "to" shows the speaker means to say "I want to be funny."

I'm just tryna to be funny though.

Finally, many informal contractions show in writing how words sound when we speak quickly. I do not recommend that you use these in your own writing, unless you are showing exactly what someone said. Or maybe you can use them to write poems or songs, as you can see in these examples.

You will find "gonna," the short form of "going" + "to" in this song by rock band Twisted Sister:

We're not gonna take it,

no we ain't gonna take it,

we're not gonna take it anymore

And "gimme," the short form of "give me" appears in the TV show called "Gimme a Break!" as well as the Rolling Stones song, Gimme Shelter. You will also hear "gonna" in this song.

Or I'm gonna fade away

Lemme dream till the end of the day

informal – adj. having a friendly and relaxed quality

post – v. to add (a message) to an online message board

contraction – n. a short form of a word or word group that is made by leaving out a sound or letter

pumpkin spice – n. a popular flavor used in autumn in the U.S.

flavor – n. the quality of something that you can taste

How often do you use words like "ain't" and "gonna" when you speak English? We want to hear from you. Write to us in the Comments Section.