< The Many Kinds of Roads
Update Required To play the media you will need to either update your browser to a recent version or update your Flash plugin.
By Alice Bryant
19 March 2021


This week, we answer a question from a reader about the many words used for different kinds of roads. Here's the question:

What are the differences between avenues, roads, streets, lanes, drives, ways, trails, boulevards and highways?

Well, that is a good question and one that even some native speakers wonder about. 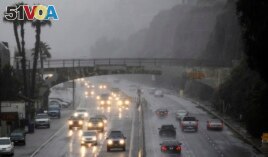 A road is a long piece of hard ground built between two places so people can walk, drive or ride easily from one place to the other.

Roads can be paved or even made of dirt or stone. Roads exist in cities, towns and rural areas. They can be large or small.

The word "road" is the most general of today's terms and is sometimes used in place of "street" or "highway" or other related words.

A street is a public road in a city or town that has buildings on one or both sides of it. Sometimes, we use the word "street" for many kinds of roads.

Streets often run across avenues, which are wider streets.

Let's take the borough of Manhattan in New York City. It has more than two-hundred numbered streets that run east to west. 42nd Street is one example.

Manhattan also has 12 numbered avenues that run north to south. An example is 5th avenue.

An avenue is a very wide street, usually inside a city. In Manhattan, most avenues are around 30 meters wide while the streets are narrower.

A way is a small side street that is connected to a larger street. And a lane is a very narrow street or path. Ways and lanes are often found in residential areas.

A boulevard is a wide and usually important city street that often has trees, grass, or flowers planted down its center or along its sides.

"Drive" is used in the name of some public roads. Drives may be big or small. In Manhattan, for example, there is FDR Drive – a six-lane highway.

Highways are paved main roads that have several lanes for traffic and connect cities, towns and other areas. Vehicles on highways drive at higher speeds than they do on other kinds of roads.

And finally, we have trails.

A trail is usually a rough path through a field or a forest. Some trails are for people and animals to walk or ride on. Others are for outdoor activities, like hiking and bicycling.

And that's Ask a Teacher.

Do you have a question for the teacher? We want to hear from you. Write to us in the Comments Section below or email us at learningenglish@voanews.com.

pave – v. to cover something with a material (such as stone, tar or concrete) that forms a hard, level surface for walking, driving or something else

borough – n. one of the five main sections of New York City

residential – adj. of or relating to the places where people live

lane – n. a part of road that is marked by painted lines and that is for a single line of vehicles

rough – adj. having a surface that is not even