< The 'Burn Everything' Policy
Update Required To play the media you will need to either update your browser to a recent version or update your Flash plugin.
By Anna Matteo
02 October 2021

Today, we talk about burning and the effects of extreme heat. There is a special word for this. Scorch is a damaged area or mark that is caused by burning. 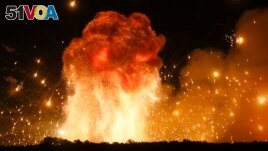 FILE - A powerful explosion is seen in the ammunition depot at a military base in Kalynivka, west of Kiev, Ukraine, early Wednesday, Sept. 27, 2017. (AP Photo/Efrem Lukatsky)

Scorch is also a verb. When we scorch something, we burn it. But scorch sounds more serious than a burn. For example, I would not say I scorched dinner. I would say I burned it.

Sometimes we use it to describe a verb meaning to produce extreme heat. For example, the sun scorched the bare earth.

And that brings us to today's expression – scorched-earth.

Scorched-earth describes a kind of policy or way of doing something. For example, it is a kind of military policy. This policy makes sure that all resources – houses, food crops, factories, vehicles – are destroyed before an enemy can use them. You destroy all things of value so that they cannot be used against you.

Burning bridges is a related expression. We wrote about this in an earlier Words and Their Stories. This expression is often used in personal relationships. If you burn your bridges, you destroy your relationships. Again, there is no going back and saying you are sorry.

However, when you burn bridges, relationships with others is the only thing you are destroying. So, these two expressions – burning bridges and scorched-earth are not interchangeable.

But they have a similar goal -- destruction.

Let's say a friend of mine, Georgina, was a talent agent. She represented many successful writers, artists and musicians in a large city. When the business got too big, she opened an agency with her friend, Stephanie. They grew the company, and it was very profitable. Georgina had all the contacts, but Stephanie knew how to oversee a company -- maybe too well.

One day, Georgina arrived to the office to find herself locked out! Her "friend" had tricked her into signing away her rights to the company.

Georgina knew the most valuable things the company owned were the contacts she had. So, she burned all her bridges and destroyed the relationships with all those contacts. It took her awhile. But, in time, the agency failed.

Stephanie is still looking for work. But Georgina moved to a beautiful island and opened a restaurant.

And that's all the time we have for this Words and Their Stories! Until next time ... I'm Anna Matteo.

bare – adj. having no covering

last-ditch – adj. made as a final effort especially to avert disaster

effort – n. energy used to do something : a serious attempt

talent – n. a special ability that allows someone to do something well

agent – n. a person who acts or does business for another