< 'That Train Has Left the Station!' (or...It's too late)
Update Required To play the media you will need to either update your browser to a recent version or update your Flash plugin.
By Anna Matteo
11 September 2021

On this program we explore words and expressions in the English language. We give examples, notes on usage and sometimes we use them in a short story. 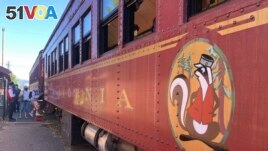 Traveling by train is a great way to see more of a country. People board the Skunk Train in Willits, Calif., Wednesday, Aug. 4, 2021. (AP Photo/Haven Daley)

A train ride can be a wonderful adventure.

Imagine that you are in your final days of study in Budapest. You have lived there as a student for over a year but have never traveled to Prague. So, on your last weekend, you plan a train trip from Budapest to Prague. But you only have a couple of days to make the trip.

You buy a ticket leaving late on a Friday night. You plan to catch the train after your last class. You are so excited! But after class your professor offers to buy you dinner. He wants to send you off with a celebration. You don't want to be rude. So, you agree, but your eye is always on the clock.

Dinner takes longer than you thought it would and soon it's nearing your time to catch the train. So, you thank him and say you have a train to catch. But he insists that you stay for a quick dessert and offers to drive you to the station. You do the time math in your head and figure that if he drives you, you will have just enough time to catch your train. But then, after dessert, he remembers, "Oh I didn't drive. How silly of me!" You tell him, "Thanks. I really have to go!"

You rush to the station! But by the time you get there the station, the train – your train -- is pulling away. And there won't be another one until the next night. You have missed your train and your chance to see Prague before returning home!

And that brings us to our expression for today. "That train has left the station."

It means you have missed an opportunity. The chance to do something – something you really wanted to do – has passed.

We say this when a process is already underway. The time for discussion is over. It's too late to change your mind. And it's too late to make changes. Some possibility or choice is no longer available or likely.

If you like boating expressions, you can also say: "That ship has sailed," or that someone has "missed the boat." They are all used the same way.

Besides missing an opportunity, all of these expressions could be used in another situation: When events have been put into place and there is no stopping them.

For example, let's say your mother wants to fix you up with the nice child of her boss. She arranges the whole date without talking to you first. You don't want to go, but she has already told her boss that you would.

If you were to tell me about it, I would probably say to you: "Sorry. But that train has already left the station. You must go on that date."

Usually when we use "that train has left the station" or "that ship has sailed" it means events are going forward and you can't stop them.

Now, here is a note on usage. Simply put, these sayings mean, "It's too late. So, save your breath." So, they could sound rude or thoughtless. And they are informal.

So, I would say them to a friend and co-worker. But I wouldn't say them to my boss or my professor – although it was his fault that I missed my train in the first place!

rude –adj. not showing concern or respect for others

insist –v. to demand that something happen or that someone do something

dessert –n. a usually sweet course or dish (as of pastry or ice cream) usually served at the end of a meal

silly –adj. having or showing a lack of thought, understanding, or good judgment

opportunity –n. an amount of time or a situation when something can be done

boss –n. a person whose job it is to tell others what to do; chief

informal –adj. not suited for serious or official speech and writing