< Thanksgiving and English Grammar
Update Required To play the media you will need to either update your browser to a recent version or update your Flash plugin.
By John Russell
25 November 2021


Every year around the Thanksgiving holiday, a strange ceremony happens in Washington, DC. The president stands outside the White House, gives a brief speech and then officially pardons a turkey.

A pardon is a declaration that someone will not be punished. 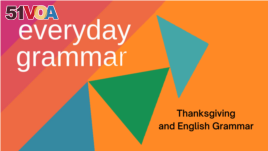 You might be asking yourself, "What is the connection between turkeys, Thanksgiving and grammar?"

In today's report, we explore what turkeys can teach you about English verbs.

In particular, we will show you how Thanksgiving can teach you to use stative verbs. We will also show you the difference between stative and progressive verbs.

What is a stative verb?

The term stative verb refers to a verb that has a stative meaning. In other words, these verbs show or describe conditions or situations that do not do anything but exist.

Verbs that commonly have a stative meaning include:

-verbs that show emotional states, such as love and dislike;

-verbs that describe sense perceptions, such as smell or taste;

-verbs that show existence, such as seem or look.

In the present tense, a verb with a stative meaning is generally used in its simple form. "I love turkey," or "Americans like turkey" are two examples.

Verbs that have stative meanings are generally not used in the progressive tense. So, you will probably not hear a native speaker say, "I am loving turkey," or "Americans are liking turkey."

Do not fear: we can use our Thanksgiving example to make the point clearer.

Imagine you are at an American store. You hear a conversation between a customer and a store employee. The customer wants to buy a turkey that weighs 10 pounds, or 4.5 kilograms.

Unlike the turkey from the pardoning ceremony, this turkey will have a sad fate: the dinner table.

Customer: How much does that turkey weigh?

Customer: How much does it cost?

In the dialogue, you can hear two examples of stative verbs: weigh and cost.

The butcher said, "The turkey weighs 10 pounds," and "The turkey costs 20 dollars." In both cases, the verbs have a stative meaning: The butcher is describing a condition or situation that simply exists – the weight and cost of the turkey.

Now imagine you are eating Thanksgiving dinner with an American family. You might hear any one of the following sentences:

All these sentences include stative verbs. You might notice that the verbs are also in the simple present form.

Why not use a progressive verb?

So, why would an English speaker not say, "The turkey is seeming undercooked," or, "I am disliking turkey?"

Susan Conrad and Douglas Biber are two English grammar experts. They say that, in general, English speakers use the progressive tense only when the subject of the verb actively controls the state or action.

In addition, English speakers generally use the progressive only when the verb describes an action or state that happens over an extended period of time.

So, you would not hear an English speaker say, "The turkey is seeming undercooked" because the subject of the verb, the turkey, does not control its state – being undercooked.

For the same reason, you would not hear an English speaker say, "I am disliking turkey," because the verb's subject, I, probably does not have control over the action of disliking turkey.

Now, some verbs can have stative and progressive meanings.

"The president is tasting the food."

In the first sentence, the food does not control whether it is good or bad. As a result, the verb taste has a stative meaning because it simply describes the condition of the food.

In the second sentence, "The president is tasting the food," the subject of the verb, the president, has control over his action.

In addition, the action takes place over an extended period of time: the president must think about tasting food, then raise the food to his mouth, then consider its quality. So, you could say that the verb taste in this example has a progressive meaning.

What can you do?

The next time you are reading or listening to the news, pay special attention to the verbs.

Notice when the progressive form is used, and when the simple form is used. Then ask yourself why. Does the verb's subject control the action? Does the action occur over an extended period of time? Or does the verb simply describe a condition that exists?

If you are still confused about whether you should use a simple or progressive verb in your own conversations, Conrad and Biber have one tip that might help you.

They say that in conversations, English speakers use simple verbs around 120 times in every 1,000 words.

Progressive verbs are much less common: they appear fewer than 20 times in every 1,000 words.*

John Russell wrote this story for Learning English. Kelly Jean Kelly was the editor.We want to hear from you. Write to us in the Comments Section.