< Thailand's Latest Pro-Democracy Movement
Update Required To play the media you will need to either update your browser to a recent version or update your Flash plugin.
By Susan Shand
10 October 2020


Forty-four years after a massacre of Thai students, Pojanee Theil returned to Thammasat University in Bangkok.

"How could they have done this to other human beings?" asked the 64-year-old. "This country has gone nowhere since then." 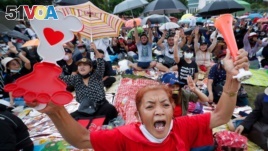 FILE - Pro-democracy activists shout slogans during a protest at Thammasat University in Bangkok, Thailand, Sept. 19, 2020. Demonstrators are calling for a new election and democratic reforms.

Pojanee was at the university on October 6, 1976, when royalist supporters and security forces killed many students. They and other students were protesting the return to Thailand of Army Field Marshall Thanom Kittikachorn.

In 1976, protesters were calling for a new constitution. Now, students at Thammasat want a lot more.

The university is once again the center of pro-democracy protests. Demonstrators are demanding big reforms.

They want a change of government and a new constitution. Most importantly, they want to reform the country's monarchy. Up until now, Thailand has barred criticism of the ruling family.

Sadness was felt in many areas earlier this week as Thais marked the anniversary of the 1976 massacre. It is considered one of the darkest days in Thailand's long struggle for democracy.

Young people gathered for a day of memorials at the university. Many have taught themselves about the violent events of that time. The history of the killings is not in their school textbooks.

"The massacre should never have happened. It's wrong," said Punnapa, a 15-year-old high school student. She said she planned to join the Thammasat law department when she is old enough.

"Only the law can bring change and justice," she said.

The latest protests have helped energize the democracy movement.

Young people "are very engaged in the political history of their country," said Chaturon Chaisang, a former student leader and long-time political activist. "These dark memories are a driving force for their movement," he told a crowd.

No one was ever tried for the killings that took place 44 years ago.

The violence shaped the relationship between people and the state in modern Thailand, notes Phil Robertson of Human Rights Watch.

"Ever since, the Thai people have struggled to break a cycle of violence and impunity," he noted.

The government and military have so far permitted the latest protests. But calls for reform of the monarchy have moved the protesters into a dangerous area. The army chiefs have promised to remain loyal to the royal family.

Thailand became a constitutional monarchy in 1932. The constitution limits the powers of the monarchy, but it is often ignored.

Democracy has never worked in Thailand. Governments often fall to forces led by the royalist army. Only one elected leader, Thaksin Shinawatra, has completed a full term. He served from 2001 to 2006.

Thaksin is a hero to poor people in the countryside, but he is hated by royalist supporters. When he was finally removed, his ouster led to 14 years of political problems, military overthrow attempts and a weak economy.

The youth protesters want to force out the current government of Prayut Chan-o-Cha. He is a former army chief who took power in 2014.

Anon Nampa is a lawyer and one of the strongest voices calling for reforms to the monarchy. At the memorial Tuesday, he said, "we promise to keep fighting."

Very wealthy and protected by the army, Thailand's King Maha Vajiralongkorn and his family have not been criticized by protestors in the past. Now, things are different.

Anon, and several other leaders of the democracy movement, have called for the king to follow the 1932 constitution.

The king came to power in 2016. Since then, he has used his wealth and control of special army troops to increase his power.

The protest groups say they will meet on October 14 in Bangkok for a peaceful demonstration. Political observers say at least 30,000 protesters will have to attend to have any effect on the government.

monarchy – n. government headed by a king or queen

department – n. the section of an organization

lynching – n. to murder by hanging someone

engage – v. to interact with