< Thailand Cancels Emergency Order as Protests Continue
Update Required To play the media you will need to either update your browser to a recent version or update your Flash plugin.
By Bryan Lynn
22 October 2020

The state of emergency was declared last week. It banned public gatherings of more than four people. It also permitted censorship of the media and gave police powers to detain people temporarily without charge. But daily protests continued in Bangkok and other cities even with the emergency order in place.

The order was lifted at 12 p.m. on Thursday. A government statement said it was canceled because "the current situation that led to the announcement of the severe situation had eased."

Government officials and state agencies were told to deal with ongoing events with existing laws, the statement said.

The protesters are demanding the resignation of Prime Minister Prayuth Chan-ocha. He is a former army general who has led the country under military rule since his group seized power in 2014. The protesters are also pushing for changes to the constitution and reforms of the country's monarchy. 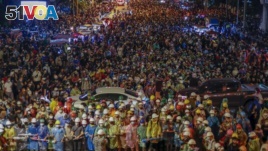 Prayuth went on national television Wednesday night to appeal to protesters to reduce political tensions. "I will make the first move to deescalate this situation," he said. "I am currently preparing to lift the state of severe emergency in Bangkok and will do so promptly if there are no violent incidents."

As he spoke, protesters marched near Government House, the place of his office, to demand that he step down. They also called for the release of activists arrested in connection with earlier demonstrations.

Protest leaders said that withdrawing the emergency order was not enough. "(Prayuth) is still seeking to stay in power while ignoring all the people's demands. The emergency decree shouldn't have been issued in the first place," said Sirawith Seritiwat, one of the leaders of the pro-democracy movement.

The demonstrators said if their demands were not met, they would return in three days.

There were no large demonstrations on Thursday, as some protesters said they were taking a day to rest. Wednesday had marked the eighth straight day of protests.

On Tuesday, the government approved a request to call a special meeting of parliament next week to seek to find a solution to the political crisis. But the pro-democracy movement has so far not shown much interest in a parliamentary solution. Prayuth's supporters hold a majority in parliament.

The order's cancelation came as a Bangkok court was preparing to rule on legal motions to force the government to end the order on the basis that it illegally restricted freedom of assembly.

The government suffered a legal setback Wednesday when a judge barred it from carrying out orders to ban several media companies for failing to obey rules under the emergency order. A police order permitted officials to block news websites that published what was described as "distorted information."

In Geneva, the United Nations' human rights office said its experts had urged Thailand's government to honor the rights of peaceful assembly and free speech. The U.N. statement said Thai people should be permitted "to freely speak their mind and share their political views, both online and offline, without prosecution."

The Associated Press and Reuters reported on this story. Bryan Lynn adapted the reports for VOA Learning English. Ashley Thompson was the editor.

censorship – n. the process of removing opinions from books, movies, letters and other media

monarchy - n. a system of government in which a country is ruled by a king and queen whose power is limited by a constitution

deescalate - v. decrease the size, scope, or intensity of something

decree – n. an official order or decision from a government or leader

assembly – n. the bringing of people together in a group

distort – v. to change the information so that it is not true or realistic

prosecute – v. to officially accuse someone of a crime in a court of law