< Thai Police Seek to Restrict Media as Protests Continue
Update Required To play the media you will need to either update your browser to a recent version or update your Flash plugin.
By Bryan Lynn
19 October 2020


As pro-democracy protests continue in Thailand, the government has sought to restrict news coverage and block Telegram, the messaging service widely used by demonstrators.

Thousands of protesters gathered in northern Bangkok on Monday, as they have in different parts of the capital over the past week. Pro-democracy demonstrations were also held Monday in other cities.

The protests have continued even after Prime Minister Prayuth Chan-ocha declared an emergency order last week. The state of emergency banned gatherings of more than four people.

A top official with Thailand's National Broadcasting and Telecommunications Commission confirmed reports that the agency had been ordered to block the availability of Telegram. The official told The Associated Press the commission was in contact with internet service providers about carrying out the order. Demonstrators around the world use Telegram to help organize protests.

Police spokesman Kissana Phataracharoen also confirmed that an order signed by the chief of police could permit officials to block news websites that publish what he called "distorted information."

Under existing laws, the government's National Broadcasting and Telecommunications Commission and the Ministry of Digital Economy and Society have the power to ban broadcasts and block internet content. Police themselves can also do so under the existing emergency order.

A spokesman for the digital ministry said it had requested court orders to take down content by four media companies and the Facebook page of the protest group Free Youth. The ministry had identified more than 300,000 pieces of content it said had violated Thai laws over the past week, the spokesman said.

The Manushya Foundation is an independent group that campaigns for online freedom. It described the government measures as an attempt to silence free media. "Since the ban on protests did not work, the military-backed government hopes to create fear of telling the truth," its director Emilie Palamy Pradichit said. "We urge free media to resist." 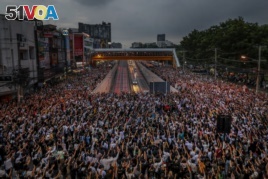 A 19-year-old protester named Jin cheered "keep fighting" during Monday's demonstration. He told the Reuters news agency that any government action against media "takes away people's rights to information."

Student demonstrators have for the first time publicly criticized the monarchy and called for its reform. Such action is unheard of in Thailand, where the royal family is protected by laws preventing criticism of any of its members.

Prayuth has said he will not quit. On Monday, he expressed support for a proposal to call a special session of parliament to discuss the situation. His supporters hold a majority in parliament.

"We are just asking people not to do wrong and destroy the government and people's property," Prayuth said. "What the government needs to do is to protect the monarchy. This is the duty of all Thais," he added.

The Associated Press, Reuters and Agence France-Presse reported on this story. Bryan Lynn adapted the reports for VOA Learning English. Ashley Thompson was the editor.

monarchy – n. a system of government in which a country is ruled by a king and queen whose power is limited by a constitution

distort - v. to change information so that it is not true or realistic

content - n. information contained in a piece of writing, a speech, a movie or on the internet

royal – adj. belonging or connected to a king or queen or member of their family