< Texas Abortion Law Forces Women to Go Out of State for Help
Update Required To play the media you will need to either update your browser to a recent version or update your Flash plugin.
By Jill Robbins
07 September 2021


A Texas law took effect last week that bans most abortions, a medical procedure used to end a pregnancy. The law says abortions may not take place if the doctor can hear or see the fetus's heart activity. That is usually possible by about six weeks into a pregnancy. Most women do not even know they are pregnant within that time period.

Even before the restrictive measure took effect, abortion providers in neighboring states were receiving more calls than usual from women asking for help.

An Oklahoma clinic had received more than two times its number of calls, two-thirds of them from Texas. A Kansas clinic is expecting a patient increase of up to 40 percent based on calls from women in Texas. A Colorado clinic had already started seeing more patients from other states, so it increased its supplies and hired additional employees before the Texas law took effect.

Anna Rupani is co-director of Fund Texas Choice, a nonprofit that helps pay travel costs and more for patients seeking out-of-state abortions. "There's real panic about how are they going to get an abortion within six weeks," she said. "There's this fear that if I can't get it done in six weeks, I may not be able to get it done because I may not be able to leave my job or my family for more than a day."

Fund Texas Choice already has seen more women reaching out for help. The group usually gets about 10 new cases per week. But, it took calls for ten cases on Wednesday alone, when the new law took effect.

Texas Governor Greg Abbott banned abortions in March 2020 for about one month under a COVID-19 emergency order. One woman, Miranda, found out she was pregnant just as that order ended. She and her partner had lost their jobs in San Antonio during the pandemic. She said, "The last thing I wanted to do was be pregnant." She spoke about her experience on the condition that only her first name be reported.

Fund Texas Choice and the Lilith Fund, another group that offers patients financial assistance for abortion costs helped Miranda find treatment in Dallas, a five-hour drive away. The groups helped pay for her transportation, overnight stay and other costs.

"It's so comforting because it's like someone saying, 'We got you. Let's take care of this together,'" Miranda said.

Such aid will be even more critical for those seeking treatment under the new ban. 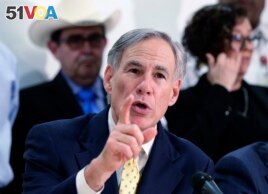 The Trust Women Foundation is a reproductive health justice group seeking expanded access to abortion. Their centers in Kansas and Oklahoma have set up more than their usual number of appointments in recent days.

Rebecca Tong, co-executive director of Trust Women Oklahoma City, said, "Oklahoma has just barely enough clinics for the amount of people here. If anyone is thinking, 'Oh, they can just go out of state, it'll be so easy,' a lot of clinics in the Midwest and South, we don't do abortion care five days a week."

Women who cannot travel or are fearful because they are undocumented immigrants might turn to abortion drugs, said Diana Gomez of the nonprofit media group Progress Texas. Several Republican-led states have passed laws making it harder to get such medicine. Texas is considering similar restrictions.

"They are going to have to go underground and find alternative means in our state," Gomez said.

On Monday, American Attorney General Merrick Garland said the federal government will work to protect women who want an abortion in the state. The attorney general is the top U.S. law-enforcement official.

Jill Robbins adapted it for Learning English. Caty Weaver was the editor.

advocate - n. a person who argues for or supports a cause or policy

panic – n. a state or feeling of extreme fear that makes someone unable to act or think normally

clinic - n. a place where people get medical help

access - n. a way of getting near, at, or to something or someone

alternative – adj. (always used before a noun) offering or expressing a choice

What do you think of the new law in Texas? We want to hear from you. Write to us in the Comments Section.