< Tesla Plans to Build Human-like Robot by Next Year
Update Required To play the media you will need to either update your browser to a recent version or update your Flash plugin.
By Bryan Lynn
25 August 2021


The chief of American electric carmaker Tesla says the company aims to complete a humanoid robot by next year.

Elon Musk said last week that the robot, called Tesla Bot, will be designed to perform jobs that people do not like to do.

He added that the human-like machine would be based on the same artificial intelligence (AI) technology that Tesla uses in its automobiles. This includes a complex system of cameras and other devices to help the robot operate in real-world situations.

Musk said the machine -- which will stand about 1.7 meters tall -- is "intended to be friendly, of course." It will be designed to "navigate through a world built for humans," he added. 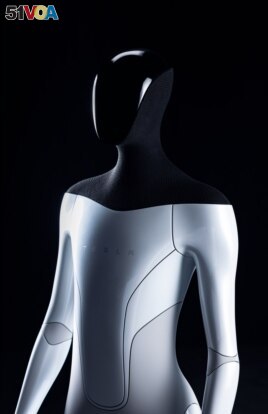 This illustration depicts the Tesla Bot, which was recently described by Tesla chief Elon Musk. Tesla says it plans to create a working model of the humanoid robot by 2022. (Photo Credit: Tesla)

The company chief described the plans during a public presentation about Tesla's latest AI systems. Musk said the Tesla Bot will use a lot of the same technology that goes into the company's electric vehicles. "It kind of makes sense to put that onto a humanoid form," he said.

However, he repeated that the main purpose of the humanoid robot would be to take over jobs that are "dangerous, repetitive and boring" to people. "In the future, physical work will be a choice. If you want to do it you can, but you won't need to do it," Musk said.

He added, for example, that the humanoid robot would be able to understand simple instructions and perform duties as directed. Such instructions could involve work related to manufacturing or picking up food for people at the store.

Musk did not provide specific details about how Tesla's current systems would fit in with the operating model of the humanoid robot.

The use of such robots in manufacturing settings has the possibility to change the world's economy, Musk said. This is because it could help deal with labor shortages that are currently a problem.

"What is the economy? At the foundation of it is labor," he told the crowd gathered for the company's presentation. "Is there any actual limit to the economy? Maybe not."

The event was held days after a U.S. government safety agency said it was investigating a series of crashes involving Tesla cars. The crashes involved the company's driver assistance systems.

Musk did not comment on that decision during the company event. He repeated, however, that Tesla is confident that its full self-driving system will perform at higher safety levels than human drivers.

The National Highway Traffic Safety Administration said it had identified 11 crashes involving Tesla models that struck emergency vehicles that were parked on the road. The accidents resulted in one death and 17 injuries.

The agency said it had confirmed that the Tesla cars involved were using either the company's Autopilot or Traffic-Aware Cruise Control systems just before the crashes. Both systems use a series of cameras and other devices to assist drivers.

Some industry experts questioned whether the humanoid robot described by Musk would become a reality. The Tesla chief has a history of announcing product launches that face major delays or are canceled.

Raj Rajkumar is a professor of electrical and computer engineering at Carnegie Mellon University. Speaking to Reuters, he asked, "Is the 'Tesla Bot' the next dream shot to pump up the hype machine?"

Rajkumar added: "I can safely say that it will be much longer than 10 years before a humanoid bot from any company on the planet can go to the store and get groceries for you."

Reuters reported on this story. Bryan Lynn adapted the report for VOA Learning English, with additional information from the Tesla AI presentation. Mario Ritter, Jr. was the editor.

intend – v. to want and plan to do something

navigate – v. to find the right direction for traveling by using maps or other equipment

repetitive – adj. doing the same thing over and over again

boring – adj. not interesting or exciting

foundation –n. an idea or fact that provides support for something

confident – adj. sure about your ability to do things well

park – v. to leave a vehicle in a particular place for a period of time

hype – n. a lot of attention given to something, especially in media, to make it seem more important or exciting than it really is