< Terrorist Designation Qassim Abdullah Ali Ahmed
Update Required To play the media you will need to either update your browser to a recent version or update your Flash plugin.
By VOA
Aug 18, 2018


The Department of State has designated Qassim Abdullah Ali Ahmed, also known as Qassim al-Muamen, as a Specially Designated Global Terrorist under Executive Order 13224. This designation imposes sanctions on foreign persons who have committed, or pose a significant risk of committing, acts of terrorism.

Such a designation seeks to deny al-Muamen the resources to plan and carry out terrorist attacks. Among other consequences, all his property and interests subject to U.S. jurisdiction are blocked, and Americans are generally prohibited from engaging in any transactions with him. 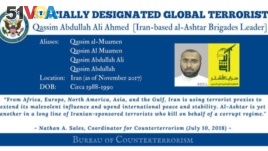 Al-Muamen is an Iran-based leader of al-Ashtar Brigades, a U.S.-designated Foreign Terrorist Organization and a Specially Designated Global Terrorist that seeks to overthrow the Bahraini government.

Al-Muamen has recruited terrorists in Bahrain, facilitated training on weapons and explosives for al-Ashtar Brigades members, and supplied members with funding, weapons, and explosives to carry out attacks. In November 2017, Bahraini authorities identified al-Muamen as being involved in an al-Ashtar Brigades plot to assassinate prominent figures in Bahrain and target three oil pipelines.

This designation action notifies the U.S. public and the international community that Qassim al-Muamen has committed, or poses a significant risk of committing, acts of terrorism.

Designations of terrorist individuals and groups expose and isolate them and deny them access to the U.S. financial system. Moreover, designations can assist the law enforcement actions of other U.S. agencies and governments.

The United States remains committed to rooting out all terrorists, including Qassim Abdullah Ali Ahmed, wherever they may hide.