< Temporary Work Apps Gain Popularity During the Pandemic
Update Required To play the media you will need to either update your browser to a recent version or update your Flash plugin.
By Gregory Stachel
31 August 2021


Computer apps that permit people to work for short periods at jobs that require little or no training are becoming popular. As industries deal with worker shortages, these apps are helping people get paying jobs they would not normally be able to find.

Stint is an app that is popular in Britain. It is aimed at workers seeking jobs that require few skills.

Gabrielle Walker is a 19-year-old student at University College London. She got the Stint app, received 15 minutes of training and got a job at a restaurant for one day.

She noted that even students with little experience could sign up with similar apps and find paid work. That work could even be for a few hours so it could fit into their schedule from week to week.

Sol Schlagman started Stint with his brother. He remembered his own experience as a college student.

He said the app is for the student who needs money to pay for housing. But he added that it can also help "the student that wants to buy a pair of shoes they wouldn't necessarily buy otherwise."

The apps are similar to the many short-term work apps that have appeared in recent years. They include Uber, DoorDash and TaskRabbit. But the latest ones are different. They link workers with employers that have a continuous need for labor but they do not want permanent employees.

Fiona Greig is the co-president of the JPMorgan Chase Institute, a financial research group. She said, "It's no surprise that during COVID, when everything became virtual that these...marketplaces might have exploded."

The newer temporary work apps could help ease the labor shortage in Britain that is partly caused by the pandemic. Recently, the National Health Service released a system that tells users if they have been near someone who has the coronavirus. Many workers had to isolate themselves. Some stores had to temporarily close because workers could not go to their jobs.

Jacob Sumner is the director of European operations at the restaurant group Chipotle. He said Chipotle uses Stint to get help during busy times. Chilango, another group of restaurants, said it also uses Stint. 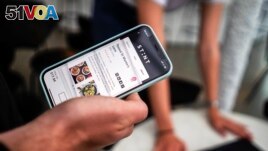 Co-founder of the app Stint, Sol Schlagman, holds his phone showing the app running, at their headquarters in Camden, London, Monday, Aug. 23, 2021. The app is becoming an important part of reducing the labor shortage in the U.K. Critics say apps like this that find temporary employees could reduce benefits given to permanent employees like sick time. (AP Photo/Alberto Pezzali)

The use of apps to connect businesses and workers for short-term work is growing in the United States too.

Sumir Meghani helped start and is chief of Instaworks. He said the rise and fall of coronavirus cases caused employment problems for businesses. They sometimes must increase or decrease operations at any moment.

Ben Ellsworth started Gigpro. He created the app to help the employment shortages caused by the pandemic. He also saw greater flexibility in the job market during the pandemic.

Ellsworth spent years in the restaurant industry. He said restaurant workers have been paid very little, have little reason to work, have been offered little flexibility or have a low quality of life.

Ellsworth suggested that after losing work, many turned to other industries or found temporary work to meet their own needs. This happened at a time when businesses needed temporary, hourly workers as restrictions eased.

The short-term employment apps serve a current need for flexibility. However, critics predict a threat to workers over a long period of time. They say if temporary workers replace permanent workers, it could reduce job security, sick pay and similar benefits.

Greig said, however, that these apps can lower barriers to work for many people who need money quickly. This includes many young workers with limited job experience.

Student Gabrielle Walker likes the apps, saying, "Everyone could do it."

Urooba Jamal reported this story for The Associated Press. Gregory Stachel adapted it for VOA Learning English. Mario Ritter, Jr. was the editor.

app – n. a computer program that performs a special function

pair – n. two things that are the same and are meant to be used together

otherwise – adv. if something did not happen, was not true,

isolate – v. to put or keep (someone or something) in a place or situation that is separate from others