< Technology Helps Explain Mystery of Crosses at Israeli Holy Site
Update Required To play the media you will need to either update your browser to a recent version or update your Flash plugin.
By Bryan Lynn
10 April 2021


Israeli researchers say technology may have solved a mystery about markings at one of Christianity's holiest places.

The markings are thousands of crosses carved into the walls of Jerusalem's Church of the Holy Sepulchre. The building is one of the world's oldest Christian religious centers. It was long thought that the markings were graffiti created by religious travelers, called pilgrims, who visited the church in the past. 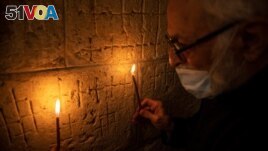 Father Samuel Aghoyan, the Armenian superior at the Church of the Holy Sepulchre, holds candles to illuminate crosses etched into the ancient stone wall of the Saint Helena chapel inside the church. (REUTERS/Ronen Zvulun)

Amit Re'em is an archaeologist working with Israel's Antiquities Authority. He told Reuters that examinations of the images showed the depths and details of the markings were very similar, suggesting that only a few people had carved the crosses.

"Maybe two or three hand artists made these crosses," Re'em said. He added: "So it's not graffiti, it's something more organized."

Re'em suggested that pilgrims visiting the Jerusalem church probably paid artists to create the crosses in their name. "You pay something to this special artist and he carved for you, for the benefit of your soul and your relatives' souls," he said.

The markings represented special crosses "in the most sacred place for Christianity on Earth," Re'em added. More research is to be carried out on the markings in an effort to confirm the latest findings.

Father Samuel Aghoyan is an Armenian official at the Church of the Holy Sepulchre. He told Reuters he thinks the new research can help the church, especially as it struggles with COVID-19 restrictions.

"Now there are no pilgrims here, (but) still their spirit is here, we know, I believe in that," he said.

Tommy Walker reported this story for VOA News. Bryan Lynn adapted the report for Learning English, with additional information from The Associated Press. Mario Ritter, Jr. was the editor.

graffiti – n. pictures or words painted or drawn on a wall, building or something else

imaging –n. the process of creating and showing pictures on a computer

renovate – v. to repair and decorate an old building

three-dimensional (3D) – adj. having or appearing to have length, depth and height

antiquities – n. items from the ancient past

soul – n. the part of a person that is not their body, which some people believe continues to exist after they die

sacred – adj. relating to religion or considered to be holy