< Teachers Consider Different Ways to Teach Language, Communication Classes
Update Required To play the media you will need to either update your browser to a recent version or update your Flash plugin.
By John Russell
06 October 2020


How can teachers best lead language classes, special education classes, or communication classes while protecting themselves and their students? This fall, American teachers are considering that very question.

With some students coming back to school for classes, teachers have begun experimenting with unusual objects, special kinds of masks or face coverings, and even protective bubbles.

Stephanie Wanzer is a teacher who works with special education students in Fairfield County, Connecticut. Special education is a term for classes with students who have special needs because of physical or learning issues. 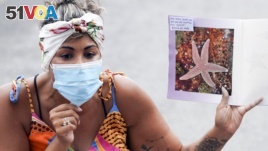 In this Sept. 2, 2020 file photo, pre-school teacher Mikki Laugier wears a protective mask as she guides students in a lesson at P.S. 15, in the Red Hook neighborhood of the Brooklyn borough of New York

While teaching, Wanzer says she would like students to see her smile, so that they know she is happy. But they cannot see her face because of her mask. Instead, Wanzer uses an unusual object - a stick with an image of a smile. Wanzer recently described working with one student to the Associated Press.

"I try to be really expressive with my eyes," she said. "He's looking at me and I'm not sure if he thinks I'm mad or happy because you can't see my mouth smiling," she said. "So I actually have a smile on a stick, which is bizarre, but it's a smile like, ‘Look, I'm smiling.'"

Jon Resendez is a teacher in Irvine, California. He teaches civics, the study of the rights and duties of citizens and of how government works.

His classes started online this year. But now that some students are returning to school, he worries about how masks will affect his classes.

"Part of what I do as a civics teacher is to teach people to engage in civic conversations," he said. A conversation is a discussion between two or more people.

Resendez said he likes to hear a small amount of sound in the class "because if the students are talking, they are thinking."

Jon Resendez added that an important part of communicating is seeing other people's facial expressions and body language.

Teaching is especially difficult for those who work with students with hearing difficulties or students who do not speak English as their first language.

Some sounds can become more difficult to hear when spoken through a mask.

Deborah Short is president of the TESOL International Association. The Virginia-based group connects teachers who teach English to speakers of other languages.

She said, "For one, the mask might muffle some sounds, making it harder for English learners to distinguish them, such as the sound for ‘P' and the sound for ‘B.'"

Short said teachers can reduce these problems by speaking loudly and clearly. They also can use videos and images to "show how sounds may be created," she explained.

Some schools have ordered clear plastic coverings so that students can see teachers' mouths.

Wanzer said one teacher wore such a mask while working with a student who has hearing difficulties. The student said the mask was unnecessary. The teacher was happy not to use it, she said, because the plastic material was so uncomfortable.

Still, teachers and schools are behind the increased demand for clear masks from companies like Baltimore-based ClearMask.

Allysa Dittmar is ClearMask's co-founder and president. The company began making clear masks after Dittmar, who is deaf, was unable to communicate well with a traditional mask while undergoing surgery.

At the C.B. Jennings International Elementary Magnet School in New London, Connecticut, teachers get carts with protective windows. Carts are small wheeled tables that are pushed. Teachers can stand behind these carts as they move around the classroom.

But even while standing behind the carts, many teachers still keep their masks on, noted Elizabeth Sked. She added that expressive eyes help teachers connect with students.

Belinda Williams is a teacher at Webb Elementary School in Franklin, Indiana. She said she and her young students have become used to wearing masks, social distancing, and regular hand cleaning.

Williams put superhero images in her classroom. She tells students they have "special powers" when they are wearing face coverings.

"Do I wish we didn't have to wear a mask? Absolutely," she said. "But if it means teaching our children in person, then I will do what it takes."

Shawn Marsh reported on this story for the Associated Press. John Russell adapted it for Learning English. Hai Do was the editor.

engage in -- phrasal verb to do (something)

muffle – v. to decrease the noise made by (something)

distinguish – v. to notice or recognize a difference between people or things

superhero – n. a fictional character who has amazing powers (such as the ability to fly)