< Tasmanian Devils Return to Australia Mainland after 3,000 Years
Update Required To play the media you will need to either update your browser to a recent version or update your Flash plugin.
By Bryan Lynn
11 October 2020


Tasmanian devils have been returned to the Australian mainland 3,000 years after the animals died off there.

The mainland population is believed to have been partly killed off by a group of dingoes – wild dogs native to the continent. Experts say other causes of extinction could include a rise in the native human population and extremely dry weather.

Tasmanian devils are meat-eating marsupials. Marsupials are mammals that reproduce differently from other animals. Most are born when they are just embryos and still developing. The baby animals take shelter for several months in a pouch on their mother's body as they develop and grow.

Two of Australia's most common mammals, the kangaroo and the koala, are marsupials. 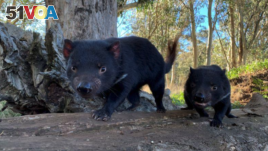 Tasmanian devils are seen in Australia in this undated handout image. (Aussie Ark/Handout via Reuters)

Tasmanian devils are generally black or brown in color and can weigh up to 8 kilograms. Experts say while devils are not dangerous to people or farm animals, they will defend themselves if attacked and can cause serious injury.

An estimated 20,000 wild devils live on the island of Tasmania, which is an Australian state. But the animals have not lived on the mainland for about 3,000 years.

There used to be a lot more devils in Tasmania, with wildlife experts estimating the population to be as large as 140,000 at one time. But a deadly disease struck the devils in the 1990s, reducing their number to as few as 20,000.

The drop in numbers led to Australian efforts to protect the devils. Wildlife activists have worked for years to strengthen the population. They argue that devils are needed in the environment because they can keep more destructive creatures - like foxes and wild cats – under control. They say this, in turn, helps protect the environment as a whole.

Conservation groups recently announced that 11 of the animals were released on the Australian mainland last month. Another release happened in July. It marked the first time the marsupials have been released into a protected wild environment on the mainland.

The 11 most recently released devils began exploring their new home once they were let go at a large wildlife refuge in New South Wales state.

Tim Faulkner is president of a conservation group called Aussie Ark. He said the "historic" releases were the first steps in a project much like the move to return wolves to Yellowstone National Park in the United States in the 1990s.

Faulkner said it was "incredible and surreal" to have reached the goal after 16 years of work. The efforts included establishing the largest Tasmanian devil mating program on the mainland.

Aussie Ark and other groups plan to release 20 more devils next year, and another 20 the following year.

Faulkner said conservationists hope the project will create an "insurance population" against the disease that crushed Tasmania's devil population. The disease, which causes cancerous tumors on the animal's face, has so far proved to be untreatable.

Some experts question whether the project will have the full desired effect on the environment.

Nick Mooney is a conservationist who has worked with Tasmanian devils for about 40 years. He told The Associated Press that wild cats are likely to return to hunting for food with increased competition from the devils.

"There is an argument that by putting devils into a situation where you stop other (meat-eaters) scavenging is that those animals, like cats and foxes, will simply start hunting. You could actually make a conservation problem where it didn't exist before," Mooney said.

The devils released this year and others in coming years will not be going into the wild just yet. Instead they will receive extra food. Some devils will be connected to devices that report their movements. Animal experts will be watching to learn how these creatures adapt to their new environment.

The Associated Press, Reuters and Agence France-Presse reported this story. Bryan Lynn adapted the reports for Learning English. was the editor.

extinction – n. the state or situation that results when something, such as a plant or animal species, has died out completely

mammal – n. an animal that feeds its babies on milk from its body

pouch – n. a pocket of skin on the stomachs of some female animals (such as kangaroos and koalas) that is used to carry young

conservation – n. the protection of plants and animals and natural areas

refuge – n. a place that provides protection or shelter

insurance – n. a guarantee against something happening

scavenge – v. the feeding by wild animals on the flesh of dead decaying animals

adapt – v. to change in order to fit in with different conditions or new environments