< Taliban Announces Interim Government, Breaks up Protests
Update Required To play the media you will need to either update your browser to a recent version or update your Flash plugin.
By Susan Shand
07 September 2021


The Taliban on Tuesday announced an interim Cabinet that placed longtime members of the group in top jobs. Many had led the 20-year battle against the U.S.-led coalition and the Afghan government.

Interim Prime Minister Mullah Hasan Akhund headed the Taliban government in Kabul during the last years of its rule. Sarajuddin Haqqani, son of the founder of the Haqqani network, will be the interior minister. The U.S. State Department considers the Haqqani network a terrorist organization.

It is not known what position in the government Taliban Supreme Leader Mullah Haibatullah Akhundzada will take. 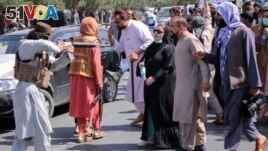 A member of the Taliban forces points his gun at protesters, as Afghan demonstrators shout slogans during an anti-Pakistan protest, near the Pakistan embassy in Kabul, Afghanistan September 7, 2021. (Reuters)

There was no evidence of non-Taliban in the new interim government. That is a main demand of the international community.

A Taliban spokesman made the announcement. He did not say how long the interim government would serve.

So far, the Taliban have not shown any desire to hold elections.

The spokesman's announcement came hours after Taliban members fired into the air to force protestors in Kabul to break up. They also arrested several reporters. It was the second time in less than one week that the Taliban used such measures to break up a demonstration in the Afghan capital.

The demonstrators had gathered outside the Embassy of Pakistan to accuse the country of aiding the Taliban's attack on the Panjshir area. The Taliban said Monday they had captured the area.

Many women were among the protesters Tuesday. Some of them carried signs that denounced Pakistan.

On Saturday, Taliban special forces fired their weapons into the air to end a protest march in the Kabul by Afghan women demanding equal rights.

The Taliban again moved quickly to end Tuesday's protest when it arrived near the presidential home. They fired their weapons into the air and arrested several reporters covering the demonstration. In one case, the Taliban beat a reporter and then arrested him. He was detained for several hours.

"This is the third time I have been beaten by the Taliban covering protests," he told The Associated Press on condition he not be named. "I won't go again to cover a demonstration. It's too difficult for me," he added.

A reporter from Afghanistan's popular TOLO News was detained for three hours by the Taliban before being freed along with his equipment and the video of the demonstration.

People waiting to leave the country

In the northern city of Mazar-e-Sharif, four airplanes being used to move about 2,000 fleeing Afghans were still at the airport.

Mawlawi Abdullah Mansour is the Taliban official overseeing the city's airport. He said only people with valid travel documents will be permitted to leave the country.

Most of the passengers are believed to be Afghans without correct travel documents.

Taliban members say they are trying to find out who among the estimated 2,000 people have valid travel documents.

U.S. Secretary of State Antony Blinken said in Qatar on Tuesday that the Taliban had promised safe passage for all seeking to leave Afghanistan with valid travel documents.

He said the United States would hold the Taliban to that promise.

"It's my understanding that the Taliban has not denied exit to anyone holding a valid document, but they have said those without valid documents, at this point, can't leave," he said.

He added: "Because all of these people are grouped together, that's meant that flights have not been allowed to go."

The State Department is also working with the Taliban to permit additional airplane flights from Kabul for people seeking to leave Afghanistan, Blinken said.

The Associated Press and the Reuters News Agency reported this story. Susan Shand adapted it for Learning English. Mario Ritter, Jr. was the editor.

interim –adj. not permanent; for a limited time

valid –adj. acceptable under the law

allow –v. to permit; to consider or treat as acceptable