< Study: T-cells From Common Cold Might Help Fight COVID-19
Update Required To play the media you will need to either update your browser to a recent version or update your Flash plugin.
By John Russell
15 January 2022


High levels of T cells from coronaviruses that cause the common cold can provide protection against COVID-19, a recent study has found.

The findings came from an Imperial College London study. The new information could help scientists develop ideas for second-generation vaccines.

Immunity against COVID-19 is complex. There is evidence of reduced antibody levels six months after vaccination. However, T cells are believed to play an important part in providing protection. 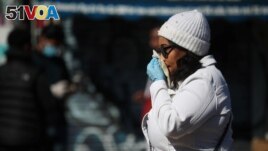 FILE - A woman blows her nose in Dalston as the spread of the coronavirus disease (COVID-19) continues, London, Britain, April 14, 2020. (REUTERS/Hannah McKay)

The Imperial College London study began in September 2020. It examined levels of cross-reactive T cells produced by earlier common colds in 52 household contacts of positive COVID-19 cases. The researchers looked at people shortly after they had come in contact with the virus. The goal was to see if the contacts went on to develop infections.

The researchers found that the 26 who did not develop infection had notably higher levels of those T cells than people who did get infected. The study did not say how long protection from the T cells would last.

Dr. Rhia Kundu was the study's lead writer. Kundu said, "We found that high levels of pre-existing T cells, created by the body when infected with other human coronaviruses like the common cold, can protect against COVID-19 infection."

The study appeared recently in the publication Nature Communications. The team that wrote about the research said that the T cells targeted proteins inside the SARS-CoV-2 virus. This finding could offer a new target for vaccine makers.

Professor Ajit Lalvani was a co-writer of the study. Lalvani said, "The internal proteins targeted by the protective T-cells we identified mutate much less."

Lalvani added that these T cells "are highly conserved between the various SARS-CoV-2 variants, including Omicron."

He said new vaccines that include these special proteins would support the "protective T cell responses that should protect against current and future SARS-CoV-2 variants."

Alistair Smout reported on this story for Reuters. John Russell adapted it for Learning English.

T cell – n. a kind of white blood cell that is part of the immune system which fights infection in the body and that develops from cells in the center of bones

response – n. something that is done as a reaction to something else