< Study Suggests Earth Is Losing Ice Faster than in Mid-1990s
Update Required To play the media you will need to either update your browser to a recent version or update your Flash plugin.
By Jonathan Evans
26 January 2021


New research suggests Earth's ice is melting faster today than in the 1990s.

An estimated 28 trillion metric tons of ice have melted away from the world's sea ice, ice sheets and glaciers since the middle of the 1990s. The yearly melt rate is now about 57 percent faster than it was 30 years ago. Scientists reported the findings in a study published in The Cryosphere.

"It was a surprise to see such a large increase in just 30 years," said study co-author Thomas Slater. He is a glaciologist, a scientist who studies glaciers, at Leeds University in Britain.

"People do recognize that, although the ice is far away, the effects of the melting will be felt by them," he said.

The melting of land ice – on Antarctica, Greenland and mountain glaciers – added enough water to the ocean during the 30-year time period to raise the average worldwide sea level by 3.5 centimeters. Ice loss from mountain glaciers made up 22 percent of the yearly ice loss totals. 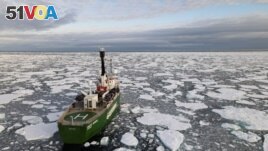 Across the Arctic, sea ice is also shrinking to new summertime lows. Last year saw the second-lowest levels of sea ice in more than 40 years. As sea ice melts, it uncovers dark water which takes in solar radiation, rather than sending it back out of the atmosphere. This is known as Arctic amplification, which increases area temperatures even further.

The worldwide atmospheric temperature has risen by about 1.1 degrees Celsius since pre-industrial times. But in the Arctic, the warming rate has been more than twice the world average in the last 30 years.

The team of British scientists studied satellite data from 1994-2017, used site measurements and created computer models to measure the ice melt. They found that the world was losing an average of 0.8 trillion metric tons of ice per year in the 1990s. In recent years, the team estimated a loss of about 1.2 trillion metric tons each year.

Gabriel Wolken is a geologist with the Alaska Division of Geological and Geophysical Surveys. He said that finding even an estimated ice loss total from the world's ice formations is "a really interesting approach, and one that's actually quite needed."

Wolken was a co-author of the 2020 Arctic Report Card released in December, but was not involved with the new study.

He said that in Alaska, people are very mindful of glacial ice loss. "You can see the changes with the human eye," he added.

amplification – n. an act, example or product of making something louder by increasing its strength

solar – adj. of or relating to the sun