< Study Shows Wildfire Smoke Can Make Clouds Drop Less Rain
Update Required To play the media you will need to either update your browser to a recent version or update your Flash plugin.
By Bryan Lynn
29 August 2021


A new study suggests that smoke from wildfires can change how clouds store water and could lead to less rainfall.

The research comes as western parts of the United States are currently experiencing drought conditions after several years of intense wildfire activity.

A team of scientists took to the skies in western U.S. states during the summer of 2018 to study the effects of wildfire smoke on clouds. They flew a C-130 research airplane through clouds with instruments to measure gas and particle levels.

In 2018, California suffered its most destructive wildfire season ever. Other western states, including Oregon, Colorado, and Washington, have also experienced intense wildfire activity in recent years.

Cynthia Twohy is an atmospheric scientist at NorthWest Research Associates and Scripps Institution of Oceanography in San Diego. She led the new study, which recently appeared in Geophysical Research Letters. 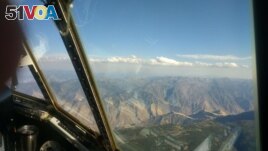 In this file photo, a thin layer of cumulus clouds caps dense smoke from the Kiawah-Rabbit Foot fires in eastern Idaho during August 2018. The image was captured from the scientists' C-130 research plane. (Photo Credit: Emily V. Fischer/American Geophysical Union)

Twohy said in a statement she decided to center on cloud research because she wondered if there was a link between the increase in wildfires and a lack of rain.

"I started thinking, ‘What are the long-term effects of this? We have drought, and we have a lot of wildfires, and they're increasing over time. How do clouds play into this picture?'" she said.

Clouds contain a collection of water droplets that form from vapor in the atmosphere. When these droplets condense onto each other within a cloud, they become heavier and eventually fall as rain.

But the water condensation process requires a solid substance for the vapor to attach to. Different kinds of particles rising up from the Earth's surface can reach clouds and enable this process.

The new study found that smoke from wildfires contains small particles that affect the way droplets form in clouds.

The main effect was the amount of water droplets formed. The team reported the smoky clouds contained about five times the number of droplets as non-smoky clouds. But data also showed that the droplets in smoky clouds were much smaller, about half the size, as those in the clouds without wildfire smoke.

It is that size difference, the researchers say, that could reduce the amount of rainfall. This is because small droplets are less likely to grow and eventually fall to the ground as rain.

"Because of their small droplet sizes, these smoky clouds are expected to reflect more light and produce less rain than clouds in clean air," the study states.

The finding could mean that active wildfire seasons in the western U.S. may in fact lead to less rain and more drought, the researchers said.

"We were surprised at how effective these primarily organic particles were at forming cloud droplets and what large impacts they had on the microphysics of the clouds," Twohy said.

The researchers noted that past studies had also found similar changes in cloud droplets related to wildfire smoke in the Amazon. However, the new study points out that, in addition to the cloud droplet changes, "a number of complex and competing" elements might also be affecting climate in the U.S. West.

Twohy also noted that different kinds of clouds behave differently. The current study examined changes in small, cumulus clouds. Other kinds that sit much higher in the atmosphere can cause heavy storms, she said.

Twohy added: "I'm hoping these results will spur detailed regional modeling studies that will help us understand the net impact of smoke on clouds and climate."

Bryan Lynn wrote this report for VOA Learning English, based on reports from the American Geophysical Union and Geophysical Research Letters. Susan Shand was the editor.

vapor – n. a substance in a gaseous state as opposed to a liquid or solid

condense – v. to change from a gas to a liquid

reflect – v. to send back or bounce off

impact – n. the effect a person, event or situation has on someone or something else

cumulus (cloud) – n. a type of thick cloud that is rounded on top and has a flat base

spur – v. to urge someone to do something or something to happen