< Study: Moon Cycle Change to Increase US Coastal Flooding in Mid-2030s
Update Required To play the media you will need to either update your browser to a recent version or update your Flash plugin.
By Bryan Lynn
18 July 2021


A new study predicts that a changing moon cycle will increase high-tide flooding across U.S. coastal areas in the mid-2030s.

The finding is based on ocean tide data collected from 89 coastal areas covering every U.S. state and territory except for Alaska. This data was examined along with flooding records and predictions for future sea level rise stretching into the year 2080.

Research results showed that the combined effects of rising sea levels linked to climate change and natural changes in ocean tides will lead to increases in coastal flooding. 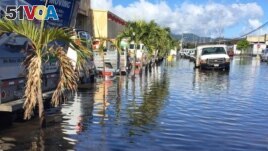 This file photo shows the result of high-tide coastal flooding in the city of Honolulu, on the Hawaiian island of Oahu. (Photo Credit: Hawaii Sea Grant King Tides Project)

Thompson said in a statement he expects the biggest increases to happen along the U.S. Pacific and Gulf of Mexico coastlines, which include Hawaii and other Pacific islands. This is important because this is where high-tide flooding goes from being mostly "a local or regional issue and becomes a national issue affecting a majority of our nation's coastlines," he said.

The researchers note that many U.S. coastal areas, especially along the Atlantic coast, are already experiencing such flooding. High-tide flooding happens when tides reach anywhere from 0.5 meters to 0.6 above the daily average high tide, says the National Oceanic and Atmospheric Administration (NOAA).

NOAA reported more than 600 incidents of this kind of flooding -- also known as "sunny day" flooding -- in 2019. Such activity is expected to worsen and lead to longer lasting floods as high tides increase in the future and sea levels keep rising.

Ben Hamlington was a co-writer of the study. He is with NASA's Jet Propulsion Laboratory in California and also the leader of the Sea Level Change Team. He said in a statement the findings can be an important resource for U.S. coastal planners who may be centered more on preparing for extreme events rather than more high-tide flooding. For planning purposes, "it's important to know when we'll see an increase," Hamlington said.

Thompson agrees that results of the study can be used by scientists, engineers and government officials who are used to preparing for rare, severe weather events such as a 100-year storm. "But we demonstrate that it is important to plan for extreme months or seasons during which the number of flooding episodes, rather than the magnitude, is exceptional," he said.

How the moon changes tides

The prediction of increased high tides starting in the mid-2030s is linked to a normal moon cycle. NASA says the cycle -- which affects how Earth lines up with the moon and the sun -- changes our planet's gravitational pull. This, in turn, affects ocean tides.

Currently, NASA says the moon is in the cycle that intensifies high tides. And while there have been issues with high-tide flooding, there has not been enough sea level rise to cause high tides "to regularly top" flooding levels, the researchers said.

But the next time the cycle comes around again, in the mid-2030s, sea level rise "will have been at work" during those years, NASA noted. The higher seas, combined with the new moon cycle, "will cause a leap in flood numbers on almost all U.S. mainland coastlines, Hawaii, and Guam."

Such flooding could leave people in cities dealing with floods "every day or two," the research team predicts.

Bryan Lynn wrote this story for VOA Learning English, based on reports from NASA and the University of Hawaii. Susan Shand was the editor.

tide – n. the regular rise and fall in the level of the sea

episode – n. a single event or period of time

magnitude – n. the large size of importance of something

regular – adj. something that happens often

wobble – v. to move from side to side