< Study: Earth Lost Big Part of Atmosphere to Moon
Update Required To play the media you will need to either update your browser to a recent version or update your Flash plugin.
By Bryan Lynn
12 October 2020


A new study suggests Earth could have lost up to 60 percent of its atmosphere in the collision of space objects that created the moon.

Most scientists believe this event happened about 4 billion years ago when Earth was still developing. They think a massive object, possibly the size of the planet Mars, hit the Earth, sending vaporized particles into space. Gravity is believed to have brought these particles together to form the moon.

The study presents evidence that this collision might have caused Earth to lose between 10 to 60 percent of the atmosphere it had. A report on the study appeared in the publication Astrophysical Journal Letters. 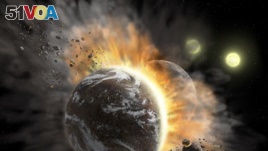 The researchers' impact hypothesis is one of three leading theories of how the moon was formed. The others suggest the moon was either created at the same time as Earth, or that it was captured by Earth's gravitational field as it traveled through space.

The researchers decided to explore how massive collisions of objects affected rocky planets with thin atmospheres. To do this, they carried out more than 300 "supercomputer simulations."

The experiment considered the positions at which the objects hit the planet, the speed of the impacts, as well as the size and mass of the colliding object.

Earlier research suggested that impact collisions during the latter stages of the formation of a planet can affect its atmosphere. The computer models in this study expanded on this idea. They showed that a collision like the one that may have formed the moon likely took a large part of Earth's atmosphere.

The study's lead researcher, Jacob Kegerreis, is with Durham University in Britain. He is a cosmologist -- a scientist specializing in the beginnings and development of the universe.

Kegerreis noted in a statement that the computer simulations do not directly explain how the moon was created. However, "the effects on the Earth's atmosphere could be used to narrow down the different ways it might have been formed."

Kegerreis said the study shows a new way to look at how similar collisions led to the loss of atmospheres of other rocky planets. Such methods could be used by scientists investigating how the moon came to be, as well as other very large impacts.

The study also suggests that large, slow-moving impacts between newer planets and massive objects could add to the planet's atmosphere if the colliding object also has its own atmosphere.

The researchers say they hope the study will give scientists a better understanding of the moon's formation and help to explain how atmospheres develop on other planets.

VOA News and Durham University reported on this story. Bryan Lynn adapted the reports for Learning English. George Grow was the editor.

vaporize – v. to turn from a solid or liquid into a gas

impact – n. the force or action of one object hitting another

hypothesis – n. an idea or explanation for something that is based on know facts but has not yet been proven

simulation – n. a recreation of a process or situation

stage – n. part of an activity or development