< Study: 1 Million Tons of US Plastic Waste Ends Up in Wrong Place
Update Required To play the media you will need to either update your browser to a recent version or update your Flash plugin.
By Bryan Lynn
07 November 2020


A new study estimates that more than 1 million tons of plastic waste from the United States does not end up where it should.

The researchers say the U.S. generated 42 metric tons of plastic waste in 2016 – the largest amount of any country in the world. Of that, between 2.7 percent and 5.3 percent was not burned, placed in landfills or otherwise correctly processed, the study found. The research was recently published in Science Advances. 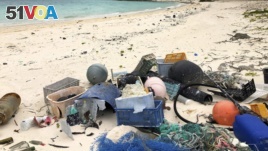 In this Oct. 22, 2019, photo, plastic and other marine debris sits on the beach on Midway Atoll in the Northwestern Hawaiian Islands. (AP Photo/Caleb Jones)

Between 1 to 2 million metric tons of plastic generated in America ended up being dropped on land or in rivers, lakes and oceans. Some U.S. plastic waste was shipped to other countries where it was not correctly disposed of, the study found.

Jenna Jambeck is an environmental engineering professor at the University of Georgia. She helped lead the research. Jambeck told The Associated Press that if 2.2 million metric tons of plastic waste was placed on the White House lawn, "it would pile as high as the Empire State Building."

Past studies had not put America among the 10 worst offending nations for plastic waste in oceans. That is because the U.S. Environmental Protection Agency (EPA) only documents what goes into official parts of the waste processing system, such as landfills and recycling centers. The U.S. data does not capture information on other ways plastic waste can be disposed of, the study said.

Some researchers decided to look deeper into what happens to the waste. They found that so much is incorrectly handled that America ranks as high as third as the worst ocean plastic polluter.

The study estimated that 510,000 to 1.5 million metric tons of U.S. plastic waste likely went into oceans.

"We are facing a global crisis of far too much plastic waste," said the study's lead writer, Kara Lavender Law. She is an oceanography professor at the Sea Education Association in Cape Cod, Massachusetts. Law said the new research was driven "by the fact that we know the United States was leaking more plastic than estimated."

The study's estimates differ widely, Law added. She said this is because many of the waste disposal activities the researchers explored are not easy to measure.

Law said a large part of the problem involves about 51 percent of U.S. plastic waste shipped to other countries for recycling. Some nations have a history of mismanaging such waste. The situation has changed in recent years, Law said. China and other countries have become more restrictive about taking U.S. waste imports, and more plastic is ending up in American landfills.

Chelsea Rochman is an ecology professor at Canada's University of Toronto. She was not part of the study. She told the AP the study's new estimates provide "a more realistic view of our mismanaged waste and leakage."

Joshua Baca is vice president for plastics at the American Chemistry Council, an industry group. He told the AP that U.S. exports of plastic waste have dropped sharply, nearly 70 percent, since reaching a high in 2016.

Baca said that beginning next year, many countries will not accept U.S. waste exports because of a new international agreement. He added that the industry is spending billions of dollars in an effort to try to fix the problem. This includes investing money in modern recycling technology and creating new business models that support reduced waste.

The Associated Press reported on this story. Bryan Lynn adapted the report for Learning English. Hai Do was the editor.

generate – v. to produce something or to cause it to be produced

dispose (of something) – v. to get rid of something, especially by throwing it away

pile – v. stack on top of something

offender – n. someone who has done something wrong or committed a crime

view – n. a position from which something can be seen

mismanage – v. to control of organize something badly