< Studies: Students’ Progress Slowed during the Pandemic
Update Required To play the media you will need to either update your browser to a recent version or update your Flash plugin.
By Dan Novak
10 August 2021


New research on national test scores suggests that students' learning greatly slowed down last year because of the pandemic. Minority and poorer students suffered the most.

Research published last week by the Center for Reinventing Public Education, or CRPE, argues there is major evidence that student progress in math and reading slowed by several months. The paper collected information from 12 different reports on student test scores during the pandemic. The CRPE study says that the average student is behind academically compared to students from previous years. The study points to school closures and remote learning as the main reasons behind the decline.

Robin Lake is one of the authors of the study. She wrote in a tweet last week that a large number of American students "have learned very little in core subjects this year, failed classes at high rates, and been absent or missing from their schools." There is "little doubt that, on average, more in-person instruction produced more learning," she wrote.

Another study, released last month by the education research group NWEA, looked at end-of-year success relative to a normal school year. Looking at national test scores, NWEA found that students made progress in math and reading in the 2020-2021 school year, but that progress was much slower than in past years. Students especially struggled in math. NWEA found that students finished the 2020-2021 school year 8 to 12 percentile points lower than students in past years.

The findings come as the delta variant of the coronavirus threatens school reopening plans. Educators and experts agree that in-person schooling should be a top concern. But more children, who are not able to get vaccinated, are getting sick with the highly contagious, and more dangerous, form of the virus. One-third of school districts in the country are not requiring masks this school year and another third have not made any decision on masks, says the publication Education Week.

Miguel Cardona is the head of the U.S. Department of Education. Speaking to reporters last week, he said he was worried about "adult actions getting in the way of schools safely reopening. Let our educators educate. Let our school leaders lead...Let's not go back to the school system of March 2020." 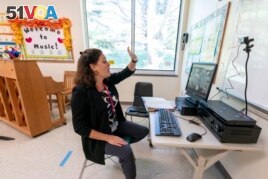 Exactly who was learning in-person at the beginning of 2021 varied greatly based on race. Federal data found that in January, 27 percent of white fourth graders were learning online. But 58 percent of Black students and 56 percent of Hispanic students were taking online classes.

That difference in in-person learning may have added to the widening of the achievement gap between mostly white and higher-income students, and mostly minority and lower-income students during the last school year.

"In math, students in majority Black schools ended the year with six months of unfinished learning, students in low-income schools with seven," said a study of student test scores by McKinsey released in July.

"Many of the students who were lower already showed the biggest drops," said Megan Kuhfeld in an interview with Education Week. Kuhfeld is one of the authors of the NWEA study. "That's very alarming to me."

Education experts argue that more assistance is needed for low-income schools that were hurting long before the pandemic.

President Joe Biden's administration had proposed a $100 billion increase to improve school facilities as a part of his infrastructure plan. Little funding for schools, however, remains in the $1 trillion bipartisan bill currently being debated in the U.S. Senate.

The CRPE study argues that the recent research shows the impact of the pandemic is short-term and that student learning can be improved upon. But Lake said a return to what was normal for many low-income schools may not be enough to prevent long-term declines in learning.

"The answer to the question, "How much will they suffer long term?" depends on adult action," Lake said in a tweet. "What we do from here matters."

core — n. the most important or basic part of something

absent — adj. not present at a usual or expected place

doubt — n. a feeling of being uncertain or unsure about something

contagious — adj. able to be passed from one person or animal to another by touching

achievement — n. something that has been done or achieved through effort : a result of hard work

alarming — n. a feeling of fear caused by a sudden sense of danger