< Students Use 1619 Project to Learn Legacy of Racism, Slavery
Update Required To play the media you will need to either update your browser to a recent version or update your Flash plugin.
By Dan Novak
29 June 2021


Several American states have proposed new legislation and policies controlling how the history of race and slavery is taught in public schools. Some single out The New York Times' 1619 Project as misrepresenting U.S. history.

The project argues that 1619 could be considered as the nation's birth year. That was when the first slave ship arrived in colonial Virginia. It says "doing so requires us to place the consequences of slavery and the contributions of black Americans at the very center of the story we tell ourselves about who we are as a country."

Conservative lawmakers and officials in several American states, however, see that as a problem.

In early June, the Board of Education in the state of Florida voted to ban the teaching of the 1619 Project and "critical race theory." Critical race theory is an idea of how racism and white supremacy have shaped U.S. society, laws and policies.

The board said the project "distort[s]" historical events. The board added that teachers may not "define American history as something other than the creation of a new nation based largely on" ideas from the Declaration of Independence. 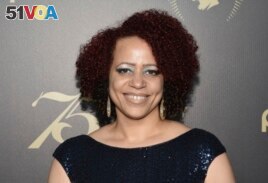 The education publication Chalkbeat says lawmakers in Arkansas, Michigan, Missouri and North Dakota have also tried to pass policies preventing the teaching of the 1619 Project.

Nikole Hannah-Jones is the creator of the 1619 Project. She said it is not supposed to replace what schools traditionally teach. But it is supposed to ask people to think about what came from slavery.

Since its release in August 2019, the project has been used in history and social studies classes across the country including Chicago, Illinois, and Washington, D.C.

Rebecca Millner teaches U.S. history at Eastern High School in Washington, D.C., and uses several essays from the project in the class.

"Good luck to not wanting to teach about the legacies of slavery and systemic racism and have kids get a good handle on U.S. history," she said. "I don't know how districts are doing that."

Last year, students from her class organized a day-long event based around the 1619 Project. Students planned a museum-like experience to teach the school and community members about the ideas behind the project.

At one station, students drew or wrote their feelings in answer to sayings from the project. At another, students filled out family trees. One station served as a memorial.

Christian is a Black student at Eastern High. With the school marching band, he played drumbeats to show how enslaved people used beats to secretly communicate with each other. The presentation, he said, showed how some music has roots in enslaved Black people.

"Everything that we have nowadays, it was formed back when we were in a harder time." The central message of the day was "to not let history go untold or unseen," Christian said.

Millner said the ideas central to the 1619 Project—that slavery was important to the founding of the country and that African Americans' fight for freedom is good for the whole country—are not new. But she said the way the information is presented in the project reaches students better than books and other resources.

The 1619 Project connects those messages "in such a powerful way for students," she said.

Rebecca Coven is an English and social studies teacher at Sullivan High School in Chicago. The school has mostly Black students. She said the project shows students the importance of perspective when it comes to writing history. The 1619 Project is almost entirely written by Black writers.

It gets "us to think about who gets to write history, and how does that story determine what we know about the world," Coven said. Many times, she added, students learn about slavery from a white perspective.

With that in mind, students in Coven's second-year English class wrote their own version, called The 1619 Project: Sullivan Edition.

Instead of writing about the impact of slavery and racism on the entire nation, the class focused on their impact in Chicago.

Students wrote about the root causes of social problems like the wealth gap, inequality in education and America's large prison system. The students' project includes discussions and surveys with students and school officials about racism and other issues. It also contains poetry and drawings.

"With this project I wanted students to understand how slavery created a social hierarchy that still impacts our institutions today," Coven said.

Raymon is a student in Coven's class. He wrote about the historical reasons why Black Americans are less trusting of the health care system and less likely to get the COVID-19 vaccine.

He said spreading knowledge of these issues could help "create change." It is important to "learn about the unfortunate history instead of trying to paint America as this perfect place," he said.

Adu is another student in Coven's class. She thinks there is a connection between states trying to ban the 1619 Project and George Floyd's murder and the nationwide protests for racial equality.

"They don't want us to know the effects of slavery are still going on," Adu said. "When George Floyd was killed, that kind of showed that even though slavery is over this is the remnant of it."

Dan Novak reported this story for VOA Learning English. Hai Do was the editor.

distort — v. to change (something) so that it is no longer true or accurate

legacy — n. something that happened in the past or that comes from someone in the past

district— n. an area established by a government for official government business

perspective — n. a way of thinking about and understanding something (such as a particular issue or life in general); the angle or direction that a person uses to look at an object

determine — v. to officially decide (something) especially because of evidence or facts, or to establish (something) exactly or with authority

survey — n. an activity in which many people are asked a question or a series of questions in order to gather information about what most people do or think about something

hierarchy — n. a system in which people or things are placed in a series of levels with different importance or status

remnant — n. the part of something that is left when the other parts are gone