< Stories, Cooking Directions for Popular American Foods
Update Required To play the media you will need to either update your browser to a recent version or update your Flash plugin.
By Dan Friedell
10 May 2021

Her girls are adults now, but when they were young, Zachman also learned a lot about books written for children.

"I just got hooked on children's books myself, I just really love ‘em," she said.

Zachman wrote for newspapers and magazines, but she wanted to try writing a children's book. With the recent publication of There's No Ham in Hamburgers, she has.

Zachman said it was not easy to learn how to write for children. She had to learn to use clear vocabulary and shorter sentences. She said, "it's been a long process, a learning process."

The book is about the history of American foods like cookies, chocolate, and cereal. When Zachman first had the idea of writing the book, most publishing companies were not interested. But that was before chefs got famous and television was filled with cooking shows – some of which featured children.

"Now, times have changed, and kids are interested in food," she said.

One of her favorite "kid food" stories is about the first breaded boneless chicken pieces, now known as nuggets. No one had found a way to cover the chicken pieces with a bread mixture that could be frozen and then stay on when cooked. When that finally happened, chicken nuggets started selling at McDonald's restaurants all over the world in the early 1980s.

"You know, we had fried chicken for hundreds and hundreds of years, why not the chicken nugget? And it really was that that was a technological challenge. ... It was actually that really required a lot of technology to make it happen, so that surprised me that this little chicken nugget was such a big deal, and we didn't have it sooner."

Zachman said she had fun learning some of the stories behind the foods people love to eat. Each story includes history, fun facts, food nutrients and even cooking directions, or recipes, in case people want to try to make the foods themselves.

Did you know, for example, that all it takes to make a really good peanut butter cookie is about 128 grams each of peanut butter and sugar, plus one egg? Divide the mixture into small equal pieces onto a baking surface, flatten them with a fork, and then bake at 176 degrees Celsius for about 10 minutes. 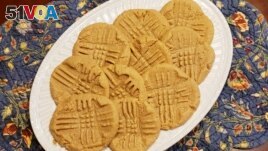 Kim Zachman's peanut butter cookies from her book There's No Ham in Hamburgers.

Some "American foods" are actually versions of food brought to the U.S. by immigrants. For example, hamburgers came from Germany but the food became popular when someone in America put them on a round piece of bread.

Speaking of something else that is round, pizza was a food eaten by poor people in Italy for hundreds of years. In 1905, an Italian immigrant named Gennaro Lombardi opened the first pizza place in New York City. Now, New York-style pizza is famous around the world.

"Because the immigrants came over, and some could find jobs, but some had a hard time finding jobs, so they would be entrepreneurs and start this little food business, little food truck business kind of thing to get going."

Now, not every story in Zachman's book is true. Some were passed down for generations and are still unproven. But one might argue that the more interesting food stories are the true ones.

For example, pepperoni is not a traditional pizza addition in Italy. It is an American creation thought to have been started by German immigrants who wanted a spicy sausage.

Anyone who watches American television probably knows that children love peanut butter and jelly spread between two pieces of bread – known as a sandwich. But it did not start with kids.

Zachman's book has 10 parts. She said she would have liked to write about more foods, but she ran out of space. She thought about doughnuts – sweet fried balls of dough topped with sugar or stuffed with cream or jelly. There are also tacos and macaroni and cheese. Maybe she will include them in another book. One thing is for sure, however. It will also be for kids.

"I like the idea that I'm hopefully inspiring kids to read and inspiring kids to learn," Zachman said. "I've got several ideas I'm researching right now. There might be another food book, which would be fun for me."

What is your favorite American food? Tell us in the Comments Section and visit 51VOA.COM.

hooked –adj. very interested in and enthusiastic about something

cookie –n. a sweet baked food that is usually small, flat, and round and is made from flour and sugar

cereal –n. a breakfast food made from grain

chef –n. a professional cook who usually is in charge of a kitchen in a restaurant

challenge –n. a difficult task or problem : something that is hard to do

style –n. a particular way in which something is done, created, or performed

entrepreneur –n. a person who starts a business and is willing to risk loss in order to make money

dough –n. a mixture of flour, water, and other ingredients that is baked to make bread, cookies, etc.

inspire –v. to make (someone) want to do something : to give (someone) an idea about what to do or create