< Spielberg’s Film Company to Partner with Netflix
Update Required To play the media you will need to either update your browser to a recent version or update your Flash plugin.
By Alice Bryant
25 June 2021


Award-winning American film director Steven Spielberg has just signed a new deal with Netflix. The movie streaming service is joining forces with Spielberg's production company, Amblin Partners, to make several films each year. The partnership is a big step for Netflix as it faces competition from other streaming services.

The deal announced Monday does not specifically include any movies that Spielberg will direct himself. For example, in December, he will release the musical film "West Side Story" with Disney's company 20th Century Studios. Amblin also has a separate deal with Universal Pictures for film releases.

In a statement, Spielberg said that storytelling will always be "at the center of everything we do." And when he and Netflix's Ted Sarandos began talks, he knew this would be great way to tell new stories and reach new audiences. The statement goes on to say that the partnership will be very satisfying for Spielberg personally, and he cannot wait to get started with the Netflix team. 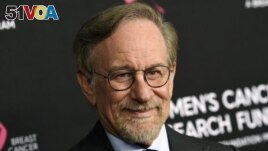 Amblin Partners takes its name from a 1968 film short by Spielberg. The company has helped produce many films outside of those made my Spielberg, including "1917" and "Green Book." Netflix and Amblin have worked together in the past on television series. They also worked together on "The Trial of the Chicago 7," a film directed by Aaron Sorkin. It was co-produced by Amblin and sold by Paramount Pictures to Netflix during the pandemic.

Spielberg has in the past been known as someone who opposes movie streaming. A headline from the news website Deadline.com on Monday asked if hell had frozen over. The expression suggests that the impossible has happened: Spielberg finally accepts the streaming of movies. But in 2019, he said that he was not against it, adding that people have mistakenly believed that about him.

In 2019, several news stories reported that Spielberg compared streamed film releases to made-for-television movies. He said such films should compete for television awards, or Emmys, not film awards, or Oscars. That year, Spielberg said he is a "firm believer" that movie theaters should be around in the future. He also said that, whether on television or in a theater, what matters is "a great story and everyone should have access to great stories."

Also that year, in an email to the New York Times, Spielberg wrote that people should have the chance to share a film experience at theaters. He said movie theaters enable crowds to laugh, cry and be afraid together, "so that...they might feel a little less like strangers." His email also said he wants movie theaters to survive and to remain important to American culture.

Since then, the lines between streaming and theaters have become less clear. For example, Netflix has presented some of its most popular film releases in theaters for a week or more. And traditional film companies like Disney and Warner Brothers now send their movies to theaters and to streaming services.

Netflix's Ted Sarandos said, "Steven is a creative visionary and leader and, like so many others around the world, my growing up was shaped by his memorable characters and stories." He added that Netflix is honored and pleased to be part of this period in Spielberg's filmmaking history.

stream - v. play continuously as data is sent to a computer over the Internet

audience - n. a group of people who gather together to listen to something or watch something

headline - n. the title written in large letters over a story in a newspaper

hell - n. the place where the devil lives and where evil people go after they die according to some religions

access - v. to be able to use, enter, or get near something

visionary - n. a person who has clear ideas about what should happen or be done in the future

character - n. a person who appears in a story, book, play, movie, or television show