< Special Saying for Mother’s Day
Update Required To play the media you will need to either update your browser to a recent version or update your Flash plugin.
By Anna Matteo
08 May 2021

Mothers have been celebrated around the world since the days of ancient Greeks and Romans.

In the United States, Mother's Day became a national holiday after an effort by Anna Jarvis "as a way of honoring the sacrifices mothers made for their children." U.S. President Woodrow Wilson signed a measure in 1914 to officially set Mother's Day on the second Sunday of May. 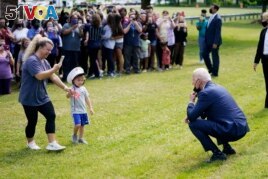 President Joe Biden stops outside at York High School and is greeted by a child and his mother, Monday, May 3, 2021, in Yorktown, Va.

Americans celebrate mothers by buying them gifts, taking them out for a meal, or surprising them with their favorite treat. Mother's Day cards, either bought or made, are a big part of this special day.

Mothers are important in so many ways, too many to count. In some families, the mother is the leader. She is called the matriarch.

The importance of mothers can be seen in words like mother tongue. This is the language you speak at home. And your mother country is the country where you were born. Sometimes, we also call this the motherland.

Then there is Mother Nature, Mother Earth, and Earth Mother. We use these words to describe the beginning and the guiding force of the whole world – humans included.

There is even a saying "necessity is the mother of invention." It means that new ways to do things are found or created when there is a strong need for them.

In any culture, the worst thing you could do would be to insult someone's mother, especially calling her ugly. That could get you into a fight very quickly.

For this Mother's Day, we will learn another saying that uses the word mother: "Diligence is the mother of good luck."

First, what does diligence mean? Diligence is careful and continued hard work. So, this saying means that hard work produces chances for success – not luck.

Let's hear it used in this example:

Did you hear the great news! Sam's book is going to be published this summer!

That is wonderful. He is SO lucky.

In his case, diligence is the mother of good luck. He spent two years non-stop writing that book.

Oh. I guess, luck had little to do with it.

So, if someone you know has had success after working diligently, you can use this saying. It's like telling them that their hard work has paid off.

For example, if you got a great job using your wonderful English and a friend says to you, "Wow, you're really lucky." You can say, "Diligence is the mother of good luck."

After all, your speaking English has nothing to do with good luck, but rather your hard work.

And that's all the time we have for this Words and Their Stories.

Anna Matteo wrote this report for Learning English. Hai Do was the editor.

matriarch – n. a woman who controls a family, group, or government

rhyme – n. one of two or more words or phrases that end in the same sounds

crack – n. a thin line in the surface of something that is broken but not separated into pieces