< South Sudanese Man Runs for Refugee Olympic Team
Update Required To play the media you will need to either update your browser to a recent version or update your Flash plugin.
By Jonathan Evans
17 July 2021


South Sudanese runner Paulo Amotun Lokoro is among a group 29 athletes named to the International Olympic Committee's Refugee Olympic Team. He will compete in the Summer Games in Tokyo from July 23 to August 8.

Lokoro fled conflict in South Sudan and joined others at the large Kakuma refugee camp in northwestern Kenya in 2006. He did not know at the time that he would soon take part in international sports.

Lokoro became interested in the Olympics when he was urged to compete in a 2015 marathon at Kakuma. The event was organized by the United Nations' refugee agency and Kenya's Tegla Loroupe. Loroupe was the first African woman to win a major marathon, beginning with the New York City marathon in 1994. 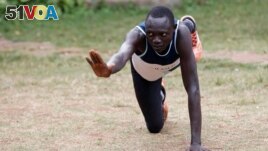 FILE - Paulo Amotun Lokoro, a refugee from South Sudan, part of the refugee athletes who qualified for the 2016 Rio Olympics, stretches during a training session in Ngong township near Kenya's capital Nairobi, June 9, 2016.

Lokoro said of the Kakuma marathon, "I didn't know I would go far. I was just running. We went to the field and jogged. I didn't have the psychology of being in front or behind. My aim was to just follow the people going in front of me. I found some guys were tired, and then I led them."

Lokoro competed in the Rio Olympics in August 2016 as a runner in the 1500 meter-event. Returning Olympians on the refugee team include South Sudanese runners Anjelina Nadai Lohalith, James Nyang Chiengjiek and Rose Nathike Likonyen. Others include swimmer Yusra Mardini from Syria and judo athlete Popole Misenga from the Democratic Republic of Congo.

Another South Sudanese runner, Matthew Lam Joar, will return to the Refugee Olympic Team as an assistant to the coaching staff. He wants to share his experiences with other refugees.

"I will be cheering for my team – a team that I was part of and still [am] part of," he said. "We believe they are the best guys because they have the courage to start running. They are world class, running with the best in the world."

In June, IOC President Thomas Bach said it was important to have refugees join with other Olympic athletes to "send a powerful message of solidarity, resilience and hope to the world."

Lokoro said he hopes to one day compete for South Sudan in international competitions such as the Olympics.

"One day, one time, if my country settles down, maybe I will go back and represent my country," he said.

marathon - n. a running race that is 42 kilometers long

psychology - n. the way a person or group thinks

coach – v. to give (someone) instructions on what to do or say in a particular situation

courage – n. to give (someone) instructions on what to do or say in a particular situation

solidarity – n. a feeling of unity between people who have the same interests, goals

resilience – n. the ability to become strong, healthy, or successful again after something bad happens