< Sometimes 'It Takes Two to Tango'
Update Required To play the media you will need to either update your browser to a recent version or update your Flash plugin.
By Anna Matteo
10 October 2020

The tango is a South American dance that is passionate and emotionally intense between two people.

Our expression for today's program is: It takes two to tango! 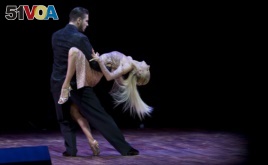 Like the tango, some actions or activities take two people. You can't do them alone. Like a fight. Fighting with yourself, whether a verbal argument or a fist fight, would look really silly! And doing the tango by yourself might look silly too.

For example, some reforms in the United States will need both parties to come together. After all, it takes two to tango.

Sometimes we shorten this expression by leaving out the subject and say, "takes two to tango."

We need to work together on this problem, or we will never find a solution. Like the saying goes, "it takes two to tango.''

This project is too big for one person. I'll help you. Takes two to tango!

We have a similar expression. It also means that two people are involved in something. The expression "two can play at that game" means what one person does, another can do too. We use this expression to involve ourselves in the action: We are going to do the same thing that someone else is doing.

Let's say, someone plays a trick on you. They throw a balloon filled with water at you and you get soaked. You shout, "Two can play at that game!" And then you throw a water balloon at them!

Usually we use this in an "I will get you back" kind of way.

Look I know that you want the new job in the design department. So, I'm going to tell you something – something about Daryl.

He wants the job too, doesn't he?

Yes. And he just invited the boss to a football game.

I don't think the boss sings.

I don't think that's a thing. But keep thinking.

Until next time, I'm Anna Matteo.

Anna Matteo wrote this story for VOA Learning English. Mario Ritter, Jr. was the editor. The song at the end is Louis Armstrong singing "It Takes Two to Tango."

passionate – adj. having, showing or expressing strong emotions or beliefs

fist fight –n. a fight in which people hit each other with their fists

silly – adj. having or showing a lack of thought, understanding, or good judgement