< Some Scientists Question Need for Yearly COVID-19 Booster Shots
Update Required To play the media you will need to either update your browser to a recent version or update your Flash plugin.
By Bryan Lynn
20 May 2021


Some scientists say there is growing evidence that yearly booster shots may not be needed to protect people against COVID-19.

Vaccine developers have been advising that the world will need yearly booster injections to remain protected. Vaccine producers have also suggested that new vaccines might be necessary to fight new virus versions, also called variants.

But these suggestions were disputed by more than 12 influential disease and vaccine development experts who recently spoke to Reuters news agency reporters.

Some of the scientists expressed concern that public expectations around COVID-19 boosters are being set by drug company executives rather than health specialists. Still, many agreed that preparing for such a need as a precaution was reasonable. 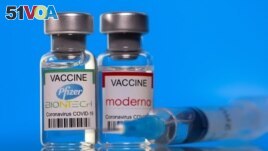 The scientists fear that a push by wealthy nations for repeat vaccination as early as this year will deepen the divide with poorer countries that are struggling to buy vaccines. In some nations, it may take years to vaccinate their citizens even once.

"We don't see the data yet that would inform a decision about whether or not booster doses are needed," said Kate O'Brien. She is director of the Department of Immunization, Vaccines and Biologicals at the World Health Organization (WHO).

O'Brien said the WHO is forming a group of experts to examine available data on virus variants and the effectiveness of vaccines before issuing advice on future vaccination programs.

The chief of Pfizer, Albert Bourla, has said people will "likely" need a yearly booster of the company's vaccine to keep high levels of immunity against COVID-19 and its variants. Such a booster would be similar to yearly shots many people are urged to get to protect themselves against influenza infection.

Dr. Tom Frieden is the former director of the U.S. Centers for Disease Control and Prevention (CDC). He disagrees with that idea. "There is zero, and I mean zero, evidence to suggest that that is the case," he told Reuters.

"It's completely inappropriate to say that we're likely to need a (yearly) booster, because we have no idea what the likelihood of that is," Frieden added. Frieden is now head of the international public health campaign Resolve to Save Lives.

Pfizer reacted to the criticism by saying it expects a need for boosters while the virus is still spreading widely. That need could lessen when the pandemic is more fully controlled, a company spokeswoman said.

Moderna CEO Stephane Bancel said his company aims to produce a vaccine by the autumn that targets a variant first identified in South Africa. He said he expects repeat boosters will be needed.

The United States is preparing to have booster doses available for Americans. The European Union, Britain and Israel have ordered new supplies of COVID-19 vaccines to deploy as protective boosters.

Some health experts say vaccine makers are right to plan for boosters since no one knows what will be needed in the future.

Richard Hatchett is the chief executive of the Coalition for Epidemic Preparedness Innovations (CEPI), which has financed many vaccine projects. He told Reuters that if the vaccine producers have the doses on hand, governments can then decide for themselves whether to buy the products.

Reuters reported on this story. Bryan Lynn adapted the report for VOA Learning English. Susan Shand was the editor.

precaution – n. an action that is done to prevent something unpleasant or dangerous from happening

dose – n. the amount of medication to be taken at one time

immunity – n. the power to keep yourself from being affected by a disease