< Smallest Rubik’s Cube Ever Goes on Sale in Japan
Update Required To play the media you will need to either update your browser to a recent version or update your Flash plugin.
By Caty Weaver
25 September 2020

Advertised as a "super-small" Rubik's Cube, it was created to mark the 40th anniversary of the box-shaped puzzle in Japan. 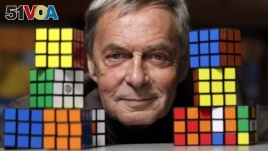 The puzzle is made of metal and comes with a box for its display, says MegaHouse Corporation, a business of Japan's Bandai Company.

The Rubik's Cube is very small but playable. People can buy it now and expect shipment beginning in December.

Erno Rubik of Hungary invented the Rubik's Cube in the 1970s. At the time, he was an architecture professor. An American company, Ideal Toys, turned the puzzle into a hit product in the 1980s. It was an immediate hit in Japan, where more than 4 million were sold in the first eight months after it went on sale in July 1980. By 1982, more than 100 million Rubik's Cubes were sold worldwide.

The new tiny cube was shown this week at an exhibit in Tokyo organized by the Hungarian Embassy. The exhibit also includes an artwork made with Rubik's Cubes. The show ends on November 9.

Norbert Palanovics, the Hungarian Ambassador to Japan, said he tells anyone who will listen about the Rubik's Cube. He said it represents the small, simple but intelligent qualities of the country that he is so proud of.

"The Rubik's Cube is part of our everyday life, here in Japan, too, and inspires everyone," he said.

The Associated Press reported this story. Caty Weaver adapted it for VOA Learning English. George Grow was the editor.

puzzle – n. a question or problem that requires thought, skill, or cleverness to be answered or solved

display – n. an arrangement of objects intended to decorate, advertise, entertain, or inform people about something

architecture – n. the art or science of designing and creating buildings

inspire – v. to make (someone) want to do something : to give (someone) an idea about what to do or create

proud – adj. very happy and pleased because of something you have done, something you own, someone you know or are related to, etc.