< Small Coronavirus Air Particles Could Be Threat
Update Required To play the media you will need to either update your browser to a recent version or update your Flash plugin.
By Anna Matteo
05 October 2020

At a university in the United States, people infected with the new coronavirus are part of an experiment. 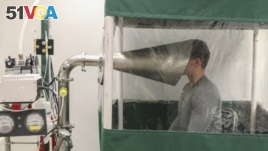 This February 2018 shows a cone-shaped machine in Dr. Donald Milton's Public Health Aerobiology, Virology, and Exhaled Biomarker Laboratory of the university in College Park, Maryland. (Photo provided by the University of Maryland School of Public Health via AP)

The subjects put their faces into the big end of a large cone-shaped device. They then say the alphabet and sing or just sit quietly for half an hour. The cone captures everything that comes out of their mouths and noses.

The device is helping researchers study a big question: Exactly how does the virus that causes COVID-19 spread?

The Associated Press recently reported on the study at the University of Maryland.

The coronavirus has been known to link up with small liquid particles released by an infected person. People expel particles when coughing, sneezing, singing, talking, and even breathing.

But these droplets come in any number of sizes. The University of Maryland researchers are attempting to identify how risky the different sizes are.

Since the early days of the COVID-19 pandemic, public health officials have been concerned about larger particles from the coronavirus. But some scientists are now studying smaller particles, the ones that spread like cigarette smoke. These particles, called aerosols, can stay in the air for minutes to hours. They can spread throughout a room and build up if air ventilation is poor.

At one time, the World Health Organization (WHO) did not think that aerosols were a danger except in some medical situations. But later, WHO experts said that the spread of the virus through aerosols could not be ruled out in crowded and poorly ventilated indoor spaces.

Some health officials have been saying one way to avoid getting sick is to keep at least two meters away from other people. Other officials say about half that distance is safe. These suggestions are based on the idea that larger particles fall to the ground before they can travel very far.

Marr told The Associated Press she thinks infection by aerosols is "happening a lot more than people initially were willing to think." To prove this, she and others point to what they call "super-spreader" events. This is an event where one infected person may have passed the virus to many others.

Jay Butler is deputy director for infectious disease at the U.S. Centers for Disease Control and Prevention (CDC). He says the CDC continues to believe larger, heavier droplets that come from coughing or sneezing are the main method of transmission. But he added that more research may change that finding.

Butler said super-spreader events raise concerns about aerosol spread. But they do not prove it. There could be another way for very small particles to spread.

Other ways the virus may spread

At the University of California, researchers found that small droplets do not have to come directly from an individual's mouth or nose to infect. They found that when influenza virus is left on paper tissues, those papers can give off particles of the virus. So, researchers say, anyone emptying a container with tissues containing COVID-19 should wear a face mask.

Scientists who warn about aerosols say that current health advisories still make sense. Wearing a mask is still important. Make sure it covers the lower half of your face. Keep washing your hands. And again, staying farther apart is better than being closer together. Avoid crowds, especially indoors.

But experts say another big issue is air ventilation. Try to avoid a buildup of aerosol particles by staying out of poorly ventilated rooms. When possible, open windows and doors. Keep air moving and use air-purifying devices.

The best advice, researchers say, is do as much as you can outdoors. Droplets do not build up in open-air environments. And the sun's ultraviolet light can also kill the coronavirus.

Jose-Luis Jimenez is a researcher at the University of Colorado-Boulder. He says that being outdoors is most effective protective measure. He added that while it is not impossible to get infected outdoors, "it is difficult."

The Associated Press reported this story. Anna Matteo adapted it for VOA Learning English. George Grow was the editor.

cone – n. a shape that has a pointed top and sides that form a circle at the bottom

alphabet – n. the letters of a language arranged in their usual order

cough – n./v. to force air through your throat with a short, loud noise often because you are sick

sneeze – n./v. to suddenly force air out through your nose and mouth with a usually loud noise because your body is reacting to dust, a sickness, etc.

pandemic – n. medical : an occurrence in which a disease spreads very quickly and affects a large number of people over a wide area or throughout the world

ventilation – n. a system or means of providing fresh air

aerosol – n. a substance (such as hair spray or medicine) that is kept in a container under pressure and that is released as a fine spray when a button is pressed

transmission – n. the act or process by which something is spread or passed from one person or thing to another

ultraviolet – adj. technical —used to describe rays of light that cannot be seen and that are slightly shorter than the rays of violet light