< Ski Resorts Struggle to Hire Amid Trump's Student Visa Ban
Update Required To play the media you will need to either update your browser to a recent version or update your Flash plugin.
By Susan Shand
05 October 2020


Milagros Sotelo had plans to travel from South America to Tennessee to work at Ober Gatlinburg ski resort this winter. The 22-year-old student worked the last two winters in the equipment rental store at the small resort in the Smoky Mountains. She wanted to see old friends as well as improve her English. She also wanted to take a break from law school in Lima, Peru, where she lives.

But on June 22, President Donald Trump signed an executive order temporarily barring many foreign worker visas. It includes the J-1 visas that South American students often get to come to North America during their summer break. 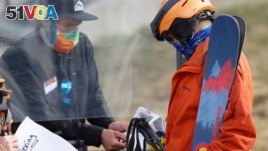 FILE - An employee is protected by a plexiglass shield while processing a skier at the reopening of Arapahoe Basin Ski Resort, which closed in mid-March to help in the effort to stop the spread of the new coronavirus.

Sotelo had to cancel her plans. Now, she is trying to find a job in Lima.

Ski resorts are trying to operate safely during the coronavirus pandemic. Measures like face coverings and social distancing are required. But Trump's order has added another problem: how to get enough workers.

Trump argued that foreigners are a risk to American workers as the country tries to restart its economy.

"American workers compete [with]...millions of aliens who enter the United States to perform temporary work," the order states. It will expire at the end of 2020.

But Sotelo argues that there are lots of jobs at or near ski resorts.

Industry leaders agree. They say it is difficult to fill temporary jobs with American workers.

"A big part of the reason is — and this is true even during COVID — most Americans want a year-round job," said Dave Byrd. He is a director at the National Ski Areas Association, NSAA.

Byrd said between 7,000 and 8,000 J-1 workers fill jobs at many of the country's 470 ski resorts every winter. Another 1,000 to 2,000 workers come to U.S. resorts on H-2B visas. Those are also barred by Trump's order. In total, foreign guest workers make up around 7 percent of the workforce at U.S. ski resorts, Byrd said. Those workers, he said, are very important.

In July, the NSAA released a report that said just over 50 percent of the 202 ski resorts questioned said they could not find enough workers for the 2019-2020 winter season

Byrd said it is also hard to find workers because many ski resorts are in rural areas with costly housing.

Well-known ski areas like Vail and Telluride in Colorado, Taos in New Mexico and Jackson Hole in Wyoming are very costly to live in, Byrd noted.

Vail Resorts owns 33 ski areas in the country. It has always used foreign workers. Now it is looking in local communities to find workers for this winter. They have found that American college students are interested in these jobs now because they are not living on college campuses. The coronavirus crisis permits them to take their studies with them to a ski resort.

As for hiring Americans, "we...have been pleased with the results so far," said Vail Resorts spokesman Ryan Huff. But small resorts are worried about their opening day.

At Ober Gatlinburg, student workers from Brazil, Peru and the Dominican Republic usually fill about 150 jobs.

Many small resorts often have unfilled jobs, but "it's become very critical now," said Jerry Huskey. He has worked for the resort for 20 years, and usually spent September and October hiring foreign students.

Huskey started hiring workers on J-1 visas in the mid-1990s after a strong economy made it hard to hire Americans. Over the years, the numbers grew among foreign students.

"It's a good exchange of information and cultures...They want to see what goes on in the U.S," Huskey said.

"We're losing out on having them," he added.

The Associated Press reported this story. Susan Shand adapted it for Learning English. Ashley Thompson was the editor.

ski – v. to move through the snow on boards attached to one's legs

resort – n. a large hotel where one stays for pleasure

rental --adj. relating to goods or property that people pay to use temporarily, such as equipment or living spaces

campus – n. the area around a university or college