< Singer of Rhythm and Blues, Mary Wilson of The Supremes, Dies
Update Required To play the media you will need to either update your browser to a recent version or update your Flash plugin.
By Jonathan Evans
09 February 2021


U.S. rhythm and blues singer Mary Wilson has died at the age of 76. Wilson rose to fame as a member of the female, three-person singing group The Supremes in the 1960s.

Wilson started The Supremes with Diana Ross and Florence Ballard while living in Detroit, Michigan in 1959. The group signed a business deal with local R&B music company Motown Records two years later. But they did not have their first popular song until 1964 with "Where Did Our Love Go."

The Supremes would go on to sing a record 12 number one popular songs, including "Baby Love," "Come See About Me," "Stop! In the Name of Love," "I Hear a Symphony," and "You Can't Hurry Love." 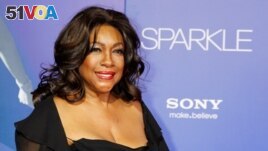 Their songs, many television appearances and live performances made them one of most popular musical groups of the 1960s. The group helped turn Motown Records into an important part of American popular culture.

Florence Ballard was replaced by Cindy Birdsong in 1967. Diana Ross left the group in 1969 for a solo career. But Wilson remained with The Supremes with different singers until the group officially broke up in 1976. She remained active for many years as a solo performer, motivational speaker and U.S. cultural ambassador. The Supremes members Wilson, Ross and Ballard were admitted into the Rock and Roll Hall of Fame in 1988.

Motown Records founder Berry Gordy praised Wilson in a statement. He said she was "quite a star in her own right" who worked hard over the years "to boost the legacy of The Supremes."

"She was a trailblazer, a diva and will be deeply missed," Gordy said.

Jonathan Evans adapted this story for Learning English from a VOA News report. Mario Ritter, Jr. was the editor.

solo –adj. something done without another person

boost –v. to increase the power of something; to push or lift up

legacy –n. something from the past or that happened in the past

trailblazer –adj. a person who makes, does or discovers something new and makes it acceptable and popular