< US Chances of Snow on Christmas Have Decreased Since 1980s
Update Required To play the media you will need to either update your browser to a recent version or update your Flash plugin.
By Gregory Stachel
23 December 2021


Research of 40 years of December 25 United States snow measurements shows that less of the country now has snow for Christmas than in the 1980s. And snow that does fall does not measure up to past depths.

Federal weather records show that the average December temperature in the continental U.S. was a little below freezing from 1981 to 1990. From 2011 to 2020, it was up to an average just under 2 degrees Celsius.

Research done by the University of Arizona for the Associated Press shows that from 1981 to 1990, on average, almost 47 percent of the country had snow on the ground Christmas Day. It showed that the average depth was 8.8 centimeters. From 2011 to 2020, Christmas snow cover was down to 38 percent, with an average depth of 6.8 centimeters. 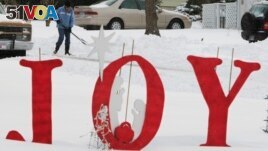 A resident digs out from a holiday snow storm on December 25, 2009, in Lawrence, Kansas. (AP Photo/Orlin Wagner, File)

The change is very clear for the area that runs from Baltimore, Maryland, to Denver, Colorado, and a few hundred miles farther north to Detroit and Chicago. The Arizona information shows that the Christmas snow cover average went from nearly 55 percent in the 1980s to just above 41 percent now. Average snow depth fell from 8.8 centimeters to 6 centimeters.

Xubin Zeng is an atmospheric scientist at the University of Arizona who ran the information. Zeng said the numbers are small enough that it is difficult to tell if this is a meaningful trend and, if so, if climate change or natural weather differences is the cause.

Still, Zeng said the reduction of snow on Christmas lines up with climate change.

Climate scientist Imke Durre said places where there is at least a ten percent chance for snow on Christmas moved north with the new normal. The nation's capital, Washington D.C., went from ten percent to seven percent.

"The movement of that line is consistent with a warmer December," Durre said. New York, Philadelphia and Concord, New Hampshire, recorded small increases in chances of Christmas snow on the ground.

David Robinson is a climate scientist at Rutgers University in New Jersey. He said the university has information based on satellite imagery that goes back to 1966. It shows continental U.S. snow in the last week of December has a small increase, not decease.

"There's no trend. You just don't see it," Robinson said.

Meteorologists, or scientists who study the weather, said that temperature changes snowfall in two different ways. In warmer borderline areas, warmer air turns snow into rain. But in cooler more northern areas, where higher temperatures are still below freezing, warmer temperatures mean more snow. This is because warmer air holds more water which comes down as snow.

Several meteorologists warned about finding trends in large amounts of information where both temperature and rain or snowfall are influences.

Victor Gensini is a meteorology professor at Northern Illinois University. He said even with those issues, fewer Christmases with snow seem to be linked with warmer temperatures from climate change.

Seth Borenstein reported this story for The Associated Press. Gregory Stachel adapted it for VOA Learning English. Susan Shand was the editor.

trend – n. a general direction of change: a way of behaving o proceeding that is developing and becoming more common

consistent – adj. in agreement with something

professor – n. a teacher especially of the highest rank at a college or university