< Simplify Your Language to Sound Smarter
Update Required To play the media you will need to either update your browser to a recent version or update your Flash plugin.
By Dr. Jill Robbins
08 July 2021


It has happened to all of us.

We open an instruction book for a new machine or read a publication and find their language is more complex than it needs to be. The result is often difficulty in understanding.

Business leaders say that clear communication helps to keep customers happy. So they advise workers to use simple language when writing or speaking to the public.

Policymakers may write laws with complex language, but they try to speak so their messages are clear.

In today's Everyday Grammar, we will talk about ways to simplify your language when speaking or writing in English.

Use fewer words to say the same thing

Kathy and Ross Petras are language experts who wrote the book You're Saying it Wrong. They said business leaders are concerned that workers often use unnecessary words and expressions in communication.

For example, they would say "at this point in time" or "at the present time" instead of using "now" to say the same thing.

Sometimes, workers would use extra words with the same meaning such as "end result," "combine together" and "past history."

Let us take a look at these extra words.

A result is at the end of something, so do we need to add "end?" Combine means to mix or bring together. There is no need for another "together." And if history is always in the past, do we need to say it is in the past again?

You may wonder why some writers and speakers use such difficult language.

Some want to use such language to sound more legal or official. Others may think longer sentences and more difficult words make them sound well-educated and intelligent.

In the 1990s, a group of United States government employees gathered to work on a common problem: people could not find or understand the information they needed in government documents.

The group created guidelines that were included in a new law, The Plain Writing Act of 2010. The law requires government agencies to train staff to use plain, or simple, language in their writing. The changes have made it easier to understand government rules and services.

Address one person, not a group

One of the guidelines is to directly speak to the reader. This helps avoid using difficult nouns to describe people or pronoun choices such as "he or she" or "his or her." A government rule once said:

The applicant must provide his or her mailing address and his or her identification number.

Under the plain writing guidelines, the rule became:

You must provide your mailing address and identification number

Former Vice President Al Gore gave another example in a 1998 speech. The rule was:

We are providing the following information about an insurance payment you indicated you have not received or which is otherwise missing.

Under the guideline, it became:

We received the missing check form you sent us. 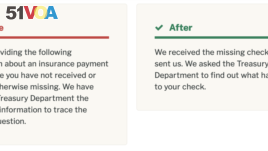 Example of changing a text to plain language

That was much easier to understand, Gore said.

Gore added that some of the main points in the guidelines include: "short is better than long; active is better than passive; everyday terms are better than technical terms, and -- you can use pronouns like "we" and "you;" in fact, you should."

Since 1959, VOA Learning English writers have used plain language to provide news and information to English learners worldwide. We try to change from the passive verb form to active. We also write with fewer details while keeping the same message. For example, when

Californians were asked to voluntarily reduce their energy use from 5 p.m. to 10 p.m. Thursday.

in Learning English, the sentence became:

Officials in California asked people to save electricity for a few hours on Thursday.

When possible, we limit ourselves to the 1500 words in the Word Book. When we must use a word that is not in the book, we explain the word or give you its meaning at the end of the story.

Over the past year, we have often written about how students and teachers continue education at home. We used simple words to replace less common ones. Sentences about "remote learning" or "virtual instruction" became "teaching by computer" or "learning on the internet."

Tools for keeping your language simple

When you are writing on the computer in English, there are several tools you can use to check for extra words and complex sentences. Microsoft Word and Google Docs offer grammar checking and spell checking.

The great American writer Ernest Hemingway was known for his use of simple language. There is even a software program named after Hemingway that suggests simpler ways to express yourself.

Dr. Jill Robbins wrote this lesson for Learning English. ----Hai Do was the editor.

customer – n. someone who buys goods or services from a business

guideline – n. a rule or instruction that

How do you make your language simpler? How do you feel about the way Learning English simplifies stories? We want to hear from you. Write to us in the Comments Section.