< Sick and Chained: Africans With Mental Health Conditions
Update Required To play the media you will need to either update your browser to a recent version or update your Flash plugin.
By Susan Shand
12 October 2020


For nearly a year, Benjamin Billal was kept chained to a rock.

"I was taken to a faith healing center by my grandmother and my mother," Billal told reporters by video link from Monrovia, Liberia on Tuesday.

"I was chained to a rock, where I stayed for about 11 months. There, there was no food. They gave us food at will -- when they feel like giving you food, they gave you food. And there, we had no freedom moving around." 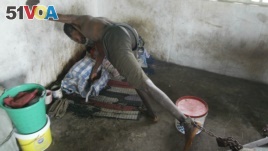 FILE - A patient from the Holy Ghost Mental Home tries to reach out, whilst chained to his bed, in Monrovia, Liberia, Aug. 29, 2003.

Why was he treated this way? Apparently because of his mental health condition. After being freed, Billal was taken to Liberia's only mental health medical center. There, doctors reported that he had depression.

The use of extreme methods to restrain and detain mentally sick people is not unusual in Africa. In fact, it is common in many parts of the world. In some cases, children as young as 10 are being chained and held in extremely small spaces by their families, a new report by Human Rights Watch has found.

The World Health Organization (WHO) estimates that as many as 20 percent of Liberians suffer from minor to moderate mental health problems. Yet, WHO data shows that the West African country has extremely limited medical care for such patients. In 2016, there was only one psychiatrist working in Liberia.

Poverty leaves many families in Liberia struggling to live. For them, experts say, mental health care is low on the list of needs to be met.

Kriti Sharma is the writer of the recent Human Rights Watch report. She described her findings as "horrific."

"People can spend years tied to a tree, locked in a cage or sheep shed," she said. She added that the living conditions are often overcrowded and dirty.

Sharma accused governments of failing their communities, especially when it comes to aid for mental health.

"One man in Kenya told me, ‘I've been chained for five years. The chain is so heavy it makes me sad.'

Sharma said the man reported spending his days in one room with six other men, without even being permitted clothing to wear.

"He told me, ‘it's not how a human being is supposed to be. A human being should be free,'" Sharma said.

Michael Njenga is the Kenya-based chairman of the Pan African Network for Persons with Psychosocial Disabilities. He says he has two recommendations for governments.

First, he says they should order full bans on the use of chains.

Billal's story ended well. His older brother rescued him from the faith healing center and took him to a mental health center in Monrovia. He was later able to complete his education.

He is now a schoolteacher and mental health activist. He says he works to make sure no one else will be chained.

chain – v. to restrain someone with metal links