< Serbian Roma Band Sings for Women’s Rights
Update Required To play the media you will need to either update your browser to a recent version or update your Flash plugin.
By Anna Matteo
27 June 2021


In Serbia, a Roma singing group is using music to spread the message of women's empowerment in their community. The all-female group aims to urge people to resist centuries-old traditions, including male-only leadership.

The band formed in 2014 and goes by the name Pretty Loud. They sing about women chained to abuse that has continued through many generations. The group sings about teenage girls whose fathers force them into marriage. The songs urge women to seek love, fight back, and stand up for their right to be treated as equals to men.

Pretty Loud has gained popularity and international attention. The band performed last year in the British capital, London, at the Women of the Year Festival. The group spoke to the Associated Press recently about its music and mission. 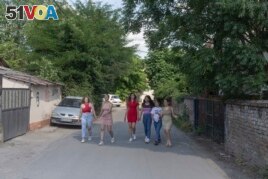 "We want to stop the early marriages ... we want the girls themselves, and not their parents, to decide whether they want to marry or not," said 24-year-old member Silvia Sinani.

"We want every woman to have the right to be heard, to have her dreams, and to be able to fulfill them, to be equal," she added.

Sinani said the idea to form a girl band was born at education and artistic classes run for Roma, or Gypsies, by a private organization called Gypsy Roma Urban Balkan Beats, or GRUBB for short. At first, she explained, the women danced in GRUBB's boys' band and then decided they wanted one of their own.

"They named us ‘Pretty Loud' because they knew that women in Roma tradition are not really loud," she said.

The band's music is a mix of rap music and traditional Roma music. It targets a younger generation of girls who are yet to make their life choices. The band includes two 14-year-old sisters.

Their songs speak to the position of women in the Roma community. Pretty Loud hopes the musical messages will help to increase self-awareness among Roma females. That could be critical in a community where early marriage is widespread. A UNICEF study published last year showed that over one-third of girls aged 15-19 in Roma communities in Serbia are already married. And, 16 percent of that group were married before age 15.

Serbian officials have formed a government group to work toward ending the practice of early marriage.

Pretty Loud member Zlata Ristic said she is an example of early marriage. She is 27 years old and gave birth to a baby boy at age 16. She said, "Nobody forced me into it, but I have realized I should not have done it."

Her marriage ended. But, Ristic said she wants other women in similar situations to know that their lives are not over once they have children. They can still work toward their dreams.

"My biggest reward is when 14-year-old girls write to me and say they want to become one of us, that they now attend school thanks to us, that they have improved their grades," she said.

The Roma people are among the most underserved ethnic communities in Serbia and Europe. Roma mostly settle together, creating communities separate from the society that surrounds them. The people face poverty, joblessness and discrimination.

Activists have warned that the COVID-19 crisis has increased the social isolation of minority groups and made them poorer. COVID-linked restrictions on schools have made it even harder for Roma children to stay in the educational system.

The GRUBB center is in Belgrade's Zemun area. Pretty Loud members teach music and dance at the center.

Diana Ferhatovic arrived at GRUBB four years ago. At first, she was looking for help with school lessons. But then she joined the music program and found her way into Pretty Loud.

She was with the band in London last March, just as COVID was starting to spread widely.

Ferhatovic said all the group members were nervous before they got up before the crowd to perform. But then, she said, "we blew them off their feet."

The 18-year-old said the experience was unforgettable.

Jovana Gec wrote this story for the Associated Press. Anna Matteo adapted it for VOA Learning English. Caty Weaver was the editor.

mission -n. a task or job that someone is given to do

fulfil -v. to put into effect

self-awareness -n. knowledge and awareness of your own personality or character

reward -n. something that is given in return for good or evil done or received or that is offered or given for some service or attainment

blew them off their feet – idiomatic phrase to completely impress or excite someone. to overwhelm someone emotionally. to make a very positive impression