< Senegal’s Jazz Celebration Returns After COVID-19 Health Crisis
Update Required To play the media you will need to either update your browser to a recent version or update your Flash plugin.
By Jonathan Evans
22 June 2021


Last year, the coronavirus pandemic put a stop to Senegal's yearly jazz music festival for the first time in its 29-year history.

This year the festival returned, bringing much needed life to the island of Saint Louis. The island was chosen by the United Nations Educational, Scientific and Cultural Organization (UNESCO) as a World Heritage site. UNESCO chooses World Heritage sites for having cultural, historical, scientific or other forms of importance.

Saint Louis is famous for its building styles from the 1800s and light-colored houses. 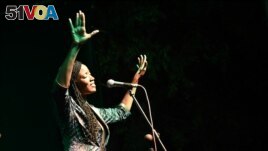 Ly said she felt a sense of relief, or ease, with the festival's return.

African rhythms, funk, gospel and blues music could be heard along the small streets of Saint Louis. Music played from restaurants, drinking places and hotels into the early morning.

Saint Louis escaped the deadliest effects of the COVID-19 disease. But a sharp drop in tourism and a weakened economy have left its citizens ready for an emotional lift that only its largest yearly event could provide.

The festival in Senegal is known as Africa's biggest jazz festival. But it has struggled with decreasing crowds since having performers like American pianist Herbie Hancock. He last performed there in 1996.

Still, the festival gets music fans from across West Africa and Europe, and the city's street performers are happy to have them. One of those street performers is 25-year-old Adama Ndaw. He told Reuters, "Jazz attracted a lot of tourists so we could play in the streets, so we managed to collect a little money. Nothing was there last year, but today it is good."

Members of Jamm Jazz, a band from the capital Dakar, were happy as they performed. The audience danced or sat closely together around crowded tables.

"The festival not taking place last year was an economic disaster for Saint Louis," said band leader Moustapha Diop. "This year, despite the crisis, the festival was held because if it wasn't, it would be a big blow for the city to come."

Cooper Inveen reported on this story for the Reuters news service. Jonathan Evans adapted this story for Learning English. Mario Ritter, Jr. was the editor.

style –n. a particular way of designing something often linked to a time period

vibration –n. a feeling that someone has or that something gives you

stage –n. a raised structure in a theater or auditorium where performers stand

audience –n. a group of people gathered together to listen to or watch a performance or movie

tourism –n. the business of providing hotels, restaurants, entertainment and other services to people who are traveling