< Scientists use ‘Romantic Solution’ to Help Endangered Species
Update Required To play the media you will need to either update your browser to a recent version or update your Flash plugin.
By John Russell
09 May 2021


White abalone are at risk of dying out. But scientists in California have developed a special way to help the sea snail population reproduce.

Kristin Aquilino is lead scientist for the White Abalone Captive Breeding Program, based at the University of California, Davis Bodega Marine Laboratory. 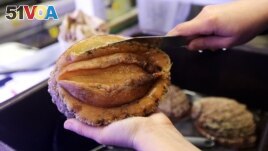 A white abalone sea snail is examined prior to a spawning event at the University of California's Davis Bodega Marine Laboratory in Bodega Bay, California, U.S. March 18, 2021. (REUTERS/Nathan Frandino)

White abalone, in her words, "cannot come back without our help."

The creatures, once common in the coastal waters of Southern California and Mexico, have been on the U.S. federal endangered species list since 2001. Its population has been hurt by overfishing, low reproduction rates and disease.

After about ten years – a time in which no white abalone were produced - Aquilino's team increased their numbers by making up a special mixture.

In the day-long process, the scientists soak the snails for hours in what they call a "chemical love potion." A potion is a liquid or drink that has a special or mysterious effect on something.

The scientists' potion has seawater and hydrogen peroxide. It leads the creatures to release their sperm and eggs.

Aquilino said, "The abalone are terrible at long-distance relationships ... We're putting them in a really romantic solution."

She added the goal of the work was to create young "that will end up back out in the wild."

Numbers of young abalone, known as larvae, reached 25,000 in 2019, but dropped in 2020 as pandemic lockdowns limited the lab to just one event for the season.

However, the larvae created then had among the highest survival rates so far, Aquilino said.

"We want to make sure we're not stressing them out too much," Aquilino said. "Hopefully that little bit of extra time gives them some more time to become very productive."

The young abalone formed are packed in bags and shipped to partner organizations in California. These young abalone have a better chance of survival with more space.

For Aquilino, the work is personal. As a student, she met her husband on a dive that studied red abalone.

Aquilino's engagement ring also has an abalone pearl. Her daughter plays with a fake abalone farm tank at home. "It has become a really important part of my identity and my family's identity," Aquilino said.

Nathan Frandino reported on this story for Reuters. John Russell adapted it for Learning English. Caty Weaver was the editor. __

snail – n. a small animal that lives in a shell that it carries on its back, that moves very slowly, and that can live in water or on land

endangered -- adj. used to describe a type of animal or plant that has become very rare and that could die out completely

soak – v. to put (something) in a liquid for a period of time

stress – v. to feel very worried or anxious about something : to feel stress