< Scientists Study How Ocean Seagrasses Can Fight Climate Change
Update Required To play the media you will need to either update your browser to a recent version or update your Flash plugin.
By Bryan Lynn
18 April 2021


Scientists say ocean seagrasses can be a valuable tool in fighting climate change. But many of these plants are being harmed by pollution linked to human activities such as mining and fishing.

In March, scientists went on an expedition to an area in the Indian Ocean thought to contain the largest field of underwater seagrass in the world. The team collected data to learn more about what affects the health of seagrasses.

Studies have shown that a big benefit of seagrass is that it can store up to two times the amount of carbon that forests do.

If seagrasses can stay healthy and grow, they can remove carbon dioxide, or CO2, from the environment. CO2 is one kind of greenhouse gas that scientists have linked to rising temperatures in Earth's atmosphere. 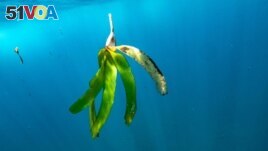 Blades of seagrass float in the ocean above the world's largest seagrass meadow and one of the biggest carbon sinks in the high seas, at the Saya de Malha Bank within the Mascarene plateau, Mauritius March 6, 2021. Tommy Trenchard/Greenpeace/Handout via Reuters)

The Indian Ocean expedition, led by environmental group Greenpeace, traveled to Saya de Malha near the island nation of Seychelles.

The field of seagrass at Saya de Malha is about the size of the European nation of Switzerland. Because the area is far from coastlines, it has stayed well protected from pollution and digging activities that can harm sea life. The seagrasses are also closer to the surface, meaning they take in more sunlight. This environment provides shelter and rich feeding grounds for thousands of different ocean creatures.

Among those taking part in the expedition were scientists from Britain's Exeter University. They say they were able to collect some of the first field data on the area's wildlife, including its little-studied seagrass beds. The team gathered up pieces of grass floating in the water to examine later in the laboratory.

It is not yet known how much carbon is being stored in Saya de Malha. But experts estimate that worldwide, the root systems of seagrasses trap more than 10 percent of the carbon buried in ocean sediment per year.

Dimos Traganos is the lead scientist on a German Aerospace Center project developing software to improve seagrass searches using satellite images and other data. He told Reuters the carbon-storing abilities of seagrass has "massive implications" for worldwide efforts to limit climate change. "We are in such an exciting period," he said.

Researchers with the United Nations Environment Programme (UNEP) estimate seagrasses cover more than 300,000 square kilometers. They are spread across all continents except for Antarctica.

The UNEP says that about every 30 minutes, human activity is helping to destroy seagrass areas about the same size of a soccer field. Scientists are now attempting to find out the current state of the world's seagrasses.

Some areas studied demonstrate the harm that human activities can cause. One study suggested that pollution from mining and damage by fisheries may have helped destroy 92 percent of mainland Britain's seagrasses over a century. The study was published in March in Frontiers in Plant Science.

This year, Seychelles began looking at its coastal seagrass carbon supply for the first time. And at least 10 countries have said seagrasses would play a part in their climate action plans, the UNEP says.

Seychelles and Mauritius, which have joint control over the Saya de Malha's seabed, should take steps to count and care for the wealth of seagrasses in the area, said James Michel. He served as president of the Seychelles for 12 years until 2016.

Michel added: "Then we'll be in a better position to know how to not only preserve it, but also to manage it to ensure that it is protected for the future."

Reuters reported on this story. Bryan Lynn adapted the report for Learning English. Hai Do was the editor.

expedition – n. a trip undertaken by a group of people for a purpose

greenhouse gas – n. gases that cause a warming of the Earth's atmosphere

sediment – n. materials that collect at the bottom of a liquid

implication – n. a result or effect

preserve – v. to keep something safe from harm; to protect

manage – v. to have control of something, such as a business, department, organization, etc.