< Scientists Mystified, Concerned, as Africa Avoids COVID Disaster
Update Required To play the media you will need to either update your browser to a recent version or update your Flash plugin.
By Gregory Stachel
27 November 2021


When the coronavirus first appeared last year, health officials feared the pandemic would kill millions in Africa. Although it's unclear how many COVID-19 will kill, the horrible, predicted events have not happened.

Scientists note that getting true COVID-19 numbers is extremely difficult, especially in some African countries. They also warn that cases could easily increase again.

Wafaa El-Sadr is the chair of international health at Columbia University in New York. She said there is something "mysterious" going on in Africa that scientists are questioning: "Africa doesn't have the vaccines and resources to fight COVID-19 that they have in Europe and the U.S., but somehow they seem to be doing better," she said.

Fewer than 6 percent of Africans are vaccinated. For months, the World Health Organization (WHO) has described Africa as "one of the least affected regions in the world" in its weekly pandemic reports.

Some researchers say the continent's younger population, more rural life, and the amount of time spent outdoors may have saved it from COVID-19 related deaths. Several studies are researching for other reasons, including genes or past infections with parasites. 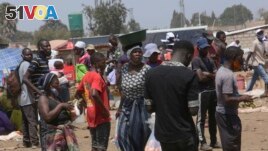 People are seen at a busy market in a poor community outside the capital Harare on November 15, 2021. (AP Photo/Tsvangirayi Mukwazhi)

On November 19, researchers in Uganda said they found a connection with COVID-19 patients and those who have had a history with the disease malaria. They said those patients were less likely to have severe COVID-19 or death compared to those with little history of the disease.

Christian Happi is the director of the African Center of Excellence for Genomics of Infectious Diseases at Redeemer's University in Nigeria. He said officials are used to dealing with outbreaks even without vaccines. He credited the extensive organization of community health workers.

"It's not always about how much money you have or how sophisticated your hospitals are," he said.

Devi Sridhar is the chair of international public health at the University of Edinburgh. She said African leaders have not gotten credit for acting quickly, noting Mali's decision to close its borders before COVID-19 even arrived.

"I think there's a different cultural approach in Africa, where these countries have approached COVID with a sense of humility because they've experienced things like Ebola, polio and malaria," Sridhar said.

In the past months, the coronavirus hit South Africa hard and is estimated to have killed more than 89,000 people there. It is by far the most deaths on the continent. African officials note the numbers could not be right, but they are not reporting the huge, expected numbers of COVID-related deaths. WHO information shows deaths in Africa make up just 3 percent of the world total. In comparison, deaths in the Americas are 46 percent and Europe has 29 percent.

In Nigeria, Africa's most populous country, the government has recorded nearly 3,000 deaths so far among its 200 million people. The U.S. records that many deaths every two or three days.

The low numbers have Nigerians like Opemipo Are, a 23-year-old in Abuja, feeling better. "They said there will be dead bodies on the streets and all that, but nothing like that happened," she said.

Oyewale Tomori is a Nigerian virologist who sits on several WHO advisory groups. He believes that Africa might not need as many vaccines as the West. The disputed idea is being seriously discussed by African scientists.

That doesn't mean, however, that vaccines are not needed in Africa.

Salim Abdool Karim studies pandemics at South Africa's University of KwaZulu-Natal and advised South Africa's government on COVID-19. He said, "We need to be vaccinating all out to prepare for the next wave." He added, "Looking at what's happening in Europe, the likelihood of more cases spilling over here is very high."

Maria Cheng and Farai Mutsaka reported this story for The Associated Press. Gregory Stachel adapted it for VOA Learning English. Susan Shand was the editor.

region – n. a part of a country or of the world that is different or separate from other parts in some way

approach – n. a way of dealing with something: a way of doing or thinking about something

humility – n. the quality or state of not thinking you are better than other people