< Scientists: Floods, Wildfires Are Signs of Global Warming
Update Required To play the media you will need to either update your browser to a recent version or update your Flash plugin.
By Hai Do
19 July 2021


Massive flooding killed at least 195 people in northern Europe last week. Massive wildfires are burning across much of the western United States. These extreme weather events, scientists warn, are clear signs of global warming. And they say more is needed to be done to fight climate change.

The rains that led to last week's floods were expected. However, politicians and weather forecasters were shocked by the amount of rain and the powerful, sudden floods that it caused. Warnings of danger came too late for many people living along Germany's rivers. Local officials described the weather event as "an explosion of the water" that destroyed buildings, electricity, and cell phone networks.

At one point, water went over the top of the Steinbach Reservoir dam in North Rhine-Westphalia state causing fear that the dam might break. It did not. The state governor said the dam was designed for a risk that might happen once every 10,000 years.

"This was exceeded in the last few days," he said.

Wim Thiery, a professor at Brussels University, spoke to the Associated Press Friday. He said of the flooding, "There is a clear link between extreme precipitation occurring and climate change." 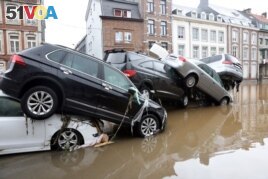 A picture taken on July 15, 2021 shows cars piled up by the water at a roundabout in the Belgian city of Verviers, after heavy rains and floods lashed western Europe, killing at least two people in Belgium. (Photo by Fran&#231;ois WALSCHAERTS / AFP)

Across the Atlantic, a different kind of extreme weather is happening in Canada and the western United States.

For the second straight year, Death Valley in California has recorded temperatures as high as 54 degrees Celsius. The U.S. National Oceanic and Atmospheric Administration, or NOAA, reported that the U.S. Pacific Northwest and western Canada experienced record highs in late June.

The extremely high temperature is part of the change that has made North America warmer and drier in the past 30 years leading to more wildfires.

On Monday, the National Interagency Fire Center said wildfire activity continues in 13 American states where 80 large fires have burned more than 475,000 hectares of land. The Bootleg Fire, one of the largest in Oregon's history, has already burned more than 1,210 square kilometers. Firefighters said such wildfire conditions are more usual in late summer or autumn.

Stefan Rahmstorf teaches ocean physics at the University of Potsdam in Germany. He said the recent heat records set in the U.S. and Canada "are so extreme that they would be virtually impossible without global warming."

What caused these extreme events?

NOAA reports that in keeping with Earth's warming trend, the month of June this year is the fifth-warmest June in the 142-year global climate record.

Along with North America, June temperatures also reached record highs in Africa. Europe's June temperature was the second-highest on record and Asia's recorded temperature in June also came in as its second warmest tying with 2010.

Climate scientists say with every 1 degree Celsius rise in temperature, the air can take in 7 percent more humidity. It can hold water longer, leading to a hot and dry condition in North America. But it also leads to an increase in huge rainfall in Europe.

Diederik Samsom is a leading member of the European Commission. He said, "A few years ago, you had to point to a point in the future or far away on the planet to talk about climate change. It's happening now — here."

Last week, the commission proposed a 10-year plan to cut by 55 percent the release of waste gases that cause global warming. Some member states oppose the plan.

In January, the U.S. rejoined the Paris Climate Agreement. The agreement restricts the release of gasses by developed nations.

Even if global warming gas releases are greatly reduced in the coming years, the amount of carbon dioxide already in the atmosphere means extreme weather is going to become more likely. And experts say we will need to be prepared for these extreme events.

"We need to make our built environment — buildings, outdoor spaces, cities — more resilient to climate change," said Lamia Messari-Becker, a professor of engineering at the University of Siegen.

Hai Do wrote this story for Learning English with additional reporting from the Associated Press. Caty Weaver was the editor.

exceed - v. to go beyond the limit of something

precipitation - n. water that falls to the ground