< Scientists Find First ‘Murder Hornet’ of 2021 in US
Update Required To play the media you will need to either update your browser to a recent version or update your Flash plugin.
By Dan Friedell
18 June 2021


Scientists near Seattle in the U.S. state of Washington say they have found the first ‘Murder Hornet' of 2021. 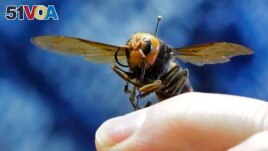 An Asian giant hornet from Japan is held on a pin by Sven Spichiger, an entomologist with the Washington state Dept. of Agriculture, Monday, May 4, 2020, in Olympia, Wash. The insects were found in 2021 closer to Seattle.

They gained a lot of attention on social media in the spring of 2020 when people reacted to their arrival as another sign of a strange year already marked by the COVID-19 health crisis.

The 5-centimeter-long insects do not belong in North America. They are considered invasive. They are also the largest hornets in the world.

They can kill smaller honeybees that farmers depend on to pollinate crops. The hornets got their nickname because they kill the bees by cutting their heads off.

Scientists who study insects are known as entomologists. They say the discovery is the first of the year and not related to the hornets found in 2019 and 2020 closer to Canada.

However, the insect experts said the hornet was dried out and is probably left over from an earlier season. The hornet is male, and the scientists said male hornets do not usually show up until July.

Dr. Osama El-Lissy works to expel invasive species for the U.S. Department of Agriculture. He called the discovery "perplexing."

It is not known how the hornet got to the town of Marysville, about 50 kilometers north of Seattle.

Entomologists say the hornets are "hitchhikers." They probably come across the Pacific Ocean on ships carrying goods or crops.

Sven Spichiger is an entomologist for the state. He called the hornets' arrival in North America a "side effect" of international trade.

Scientists looked at the insect for the first time on June 8 and confirmed it was one of the giant hornets on June 11.

They are now trying to find out if a group of insects is living closer to Seattle than they had thought.

The experts said the hornet does not look like the ones found in 2019 and 2020. Those had orange coloring around the middle part of their bodies. They believe this hornet came from a country in southern Asia.

The entomologists will set up traps in the area and ask people to look out for the insects.

The hornets are on the USDA list of harmful insect pests which means the state is permitted to kill them.

Spichiger said he and the other scientists never would have found the hornet without the help of regular people living in the area.

Nicholas Geranios wrote this story for the Associated Press. Dan Friedell adapted it for Learning English. Mario Ritter, Jr. was the editor.

How do you think the ‘murder hornet' got to Seattle? Tell us in the Comments Section and visit 51VOA.COM.

sting - v. (of an insect, plant or animal) to hurt by cutting into the skin with a sharp, pointed part that usually contains poison

pollinate –v. to carry pollen from one plant to another so that plants of the same kind can produce fruit or vegetables

hitch hiker –n. someone who gets a ride on a passing vehicle by standing on the side of the road and signaling to passing drivers