< Scientists Create First Map of World’s Corals
Update Required To play the media you will need to either update your browser to a recent version or update your Flash plugin.
By Bryan Lynn
19 September 2021


Researchers have created the first complete map of the world's coral reefs.

Development of the map was led by scientists at Arizona State University. They partnered with coral reef scientists, universities, non-profit organizations and private groups across the world.

The online map is designed to be a coral conservation tool that can also support ocean planning and coral science activities.

Called the Allen Coral Atlas, the map was named after Microsoft's late co-founder, Paul Allen. Allen's private company, Vulcan Inc., started providing financial support to the project in 2017. The idea came out of an effort by researcher Ruth Gates of Hawaii to create "super coral" to help save reefs.

When announcing the launch of the map recently, the creators said it is the first worldwide, detailed map of its kind. It gives users the ability to see detailed information about local reefs, including different kinds of undersea structures like sand, rocks, seagrass and coral. 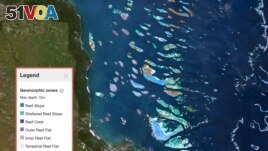 The maps include areas up to 15 meters deep. They are meant to inform policymakers facing decisions about protected ocean areas, plans for structures and seawalls and coral renewal projects.

Greg Asner led the effort to create the atlas. He is the director of Arizona State University's Center for Global Discovery and Conservation. He told The Associated Press that for the first time, the project had created "a uniform mapping of the entire coral reef" system.

Asner said the researchers depended on a network of hundreds of field volunteers who provided local information about reefs. This enabled the team to program the satellites and software to study the right areas.

The map includes a coral bleaching tool to identify corals that are struggling because of climate change and other problems.

The University of Queensland in Australia used artificial intelligence (AI) technology and local data to help build the atlas. Anyone can look at the maps for free online.

Both Allen and researcher Ruth Gates died in 2018, leaving Asner and others to carry on their work. Asner said Gates "would be so pleased...that this is really happening."

Asner said many of the calls he is receiving are from researchers who hope to use the maps to "be sure that their planning and their reef restoration work is going to have its max efficacy."

reef – n. a chain of rocks or coral or a ridge of sand at or near the surface of water

conservation – n. the act of keeping something safe from harm or from being damaged or destroyed

uniform – adj. to be the same size, shape, amount

entire –adj. whole; including all of something

bleach – v. a process that removes color from something and turns it white

restoration – n. the process of assisting the recovery of an area that has been degraded, damaged, or destroyed

efficacy – n. the ability to produce an intended result