< Scientists Concerned About Shrinking Glaciers
Update Required To play the media you will need to either update your browser to a recent version or update your Flash plugin.
By John Russell
15 September 2021


Scientists are racing to collect ice cores as the earth's warming melts large areas of ice known as glaciers and ice sheets. Some scientists say there is very little time left. And, in some cases, it is already too late.

In 2018, they had visited the area and took a small test core. The core was in good shape, said Schwikowski, head of a chemistry group at the Paul Scherrer Institute in Villigen, Switzerland. 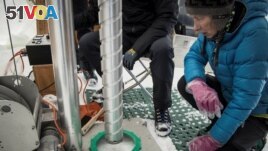 Margit Schwikowski is pictured as scientists from the Ice Memory Project prepare to drill on Monte Rosa in this June 2021 handout photo. Picture taken June 2021. (Photo courtesy of Enrico Costa for Ca' Foscari University of Venice/Handout via REUTERS)

The core had well-preserved atmospheric gases and chemical evidence of past climates.

But, in the two years it took for the scientists to return with a full drilling set-up, some of the information that had been trapped in the ice had disappeared.

The sudden change "tells us exactly how sensitive these glaciers are," said Schwikowski. "We were just two years too late."

Some glaciers are disappearing faster than expected, leading scientists to do missions sooner, rethink where to target next, and plan about increased storage.

The United Nations says almost all of the world's glaciers are becoming smaller. In its most complete climate report to date, published in August, the UN said that human actions are "very likely the main driver of the near-universal retreat of glaciers globally since the 1990s."

About 10 percent of the land area on earth is currently covered with glacial ice, says the National Snow and Ice Data Center in Boulder, Colorado.

If a glacier is melting, it means it also is not storing atmospheric gases from today for scientists to study in the future.

Beyond gases, scientists say they may be able to use ice cores to study the DNA of ancient bacteria and viruses that could come back as the world warms. Frozen insects and plant material could also reveal histories of the world's forests.

Another team of scientists, whose findings were published in July in Microbiome, found viruses nearly 15,000 years old in two ice core samples taken from the Tibetan Plateau in China. The findings identified genetic codes for 33 viruses. At least 28 of them were new to scientists.

That team of scientists included U.S.-based ice core experts Lonnie Thompson and Ellen Mosley-Thompson, who are husband and wife.

Some of the cores Thompson and his team have collected are the only remaining ice from some glaciers.

Thompson used the term archive – meaning a place where records or materials are kept - to talk about ice.

"Ice has a wonderful archive of not only the climate, but also the forcings of climate," the major causes of climate change, Thompson said. "Those histories are at risk as the earth warms and the glaciers retreat."

Cassandra Garrison, Clare Baldwin and Marco Hernandez reported on this story for Reuters. John Russell adapted it for Learning English. Susan Shand was the editor.

core – n. technical : a part that has been removed from a material for scientific study

well-preserved – adj. kept in good condition over a long period of time

code – n. a set of letters, numbers, symbols, etc., that identifies or gives information about something or someone

sensitive – adj. changing in response to something; easily affected by something in a way that is not pleasant or good